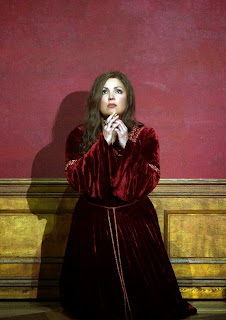 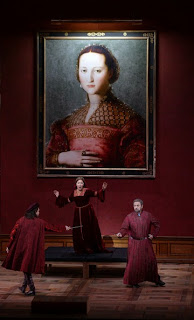 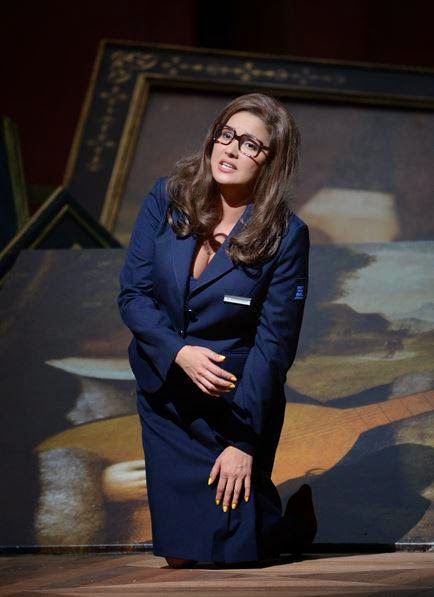 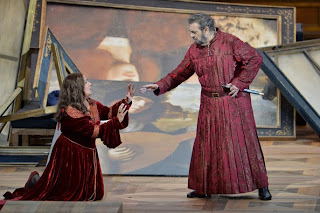 
Il Trovatore from Salzburg started earlier in the morning than I expected, and I missed the first half.  I'll have to pay more attention in the future.  I listened to the audio of the first half.

I think the way this looks is amazing, but it does not meet my requirement that the staging should explain the plot.  This staging explains nothing and is maybe as senseless as the Bayerische Staatsoper version here.  The stream also had no subtitles.  So memory has to do all the explaining.

We're in a museum with spectacular European art works, and the characters are people who work for the museum.  They switch into and back out of period costumes.  Perhaps the staging explains that Leonora and her adventures exist only in the mind of A. Netrebko (someone pointed out that the name tag on her blue suit says "A. Netrebko.")   I found it mildly amusing that while the tragedy is playing out, there might be art lovers sitting on the benches.

Netrebko and Domingo both premiered in these roles in Berlin last season.  They are both stage creatures who bring a lot of theatrical energy to their roles.  I love Anna and find that she almost achieves the greatness here that she desires and will do so in the future.  She occasionally diminuendos unnecessarily and loses a bit of control.  Her trill has very much improved.  Her voice, which is spectacular in this repertoire, is more beautiful than Callas, Radvanovsky or even Harteros, but she does not quite conquer it physically.

Placido.  Well, he's my age and I am generally astounded that he sounds as good as he does.  He is doing a better job of sounding like a baritone these days.  He was supposed to be old in Nabucco, but di Luna is supposed to be an age similar to Manrico.  It doesn't work.  He uses his voice to great theatrical effect, but the sound is that of an old man.

In the bows Gatti was vigorously shaking the hand of Francesco Meli, a real, honest to god Italian tenor.  Others have said he was blah, but I'm not sure he doesn't just seem so in comparison to Netrebko and Domingo, basically the definition of not blah.  He's young.  I found him promising.
I missed the best parts of Marie-Nicole Lemieux.

I must mention that brightly colored nail polish was part of the costuming.  I'm happy to see Netrebko is still climbing on the furniture.

Post Script.  I'm incredibly picky here.  This is actually amazing.  Watch it on medici.tv now.
Posted by Dr.B at 5:24 PM