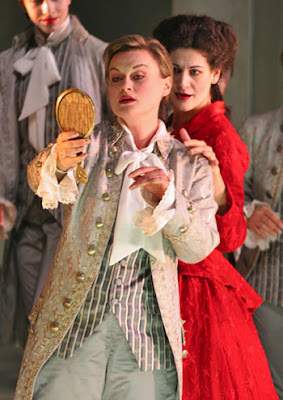 I have been subscribing to medici.tv without actually watching much of anything.  I notice that there are films from San Francisco on here.  All are highly recommended.

So I decided I should watch Handel's Alcina from the Vienna State Opera, 2011, with Harteros and Kasarova.   This is a typical opera seria with a traditional staging.  The best part is at the beginning where Alcina and Ruggiero are flirting.

You would want this for the singing which is very high class.  Anja in giant fro gets the most applause.  Why isn't Alcina played scarier?  This is hard to understand about this opera.  Here she seems genuinely in love and hugs everyone at the end.

Alois Mühlbacher is elsewhere called a countertenor who sounds like the boy soprano he is supposed to be according to Wikipedia.  This is a significant role, and Minkowski makes a fuss over him at the end.

This is for the Handel lover.  The camera makes a quick flash over to the audience, and I thought it might be Donna Leon, a known Handel lover.
#ad