Beethoven and Mozart in Sacramento 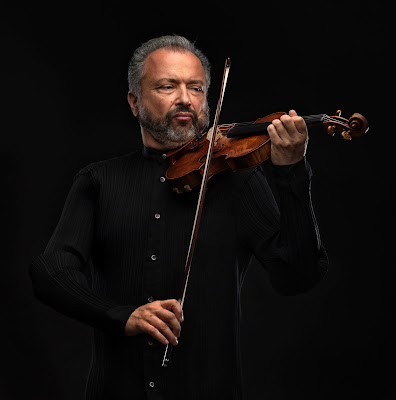 Dmitri Sitkovetsky came to Sacramento to conduct and play solo violin for the Sacramento Philharmonic and Opera.  I found this to be a particularly well constructed concert program and assigned this success to Dmitri.  Thank you for coming.

These movements are all based on music by Mozart. (Notes from Wikipedia)


I admit I'm not a huge Tchaikovsky fan.  Sitkovetsky conducted.

This is a lovely violin concerto, Mozart's last, from the time when part of his income source was playing violin solos.  He was 19.  Sources point out that his violin concertos don't show off all the possibilities of the violin as Beethoven and Brahms do.  Ok.  Mozart would have played these pieces himself, while Beethoven and Brahms would have relied on professional violin soloists active at their time.  Mozart's concerto is characterized by beautiful melodies and typical Mozart style.  For me it was very beautifully played.  Sitkovetsky was conductor and soloist.  The orchestra played well without constant attention from the maestro.

The title refers to religious brothers.  This was the first time I have heard Arvo Pärt played live on a concert.  He is a living composer from Estonia.  This piece was undoubtedly chosen because it is also a violin concerto of sorts.  It begins with a series of jarring violin arpeggios and goes on to repetitive chords and arpeggios.  You will note that this piece dates one year after Einstein on the Beach by Philip Glass.  Both Pärt and Glass are pioneers of the minimalist school.  We went to the lecture before where this was mentioned.  Sitkovetsky was the violin soloist and occasionally had opportunity to conduct.

Sitkovetsky returned to conducting for this.  This is a somewhat small symphony which could have come from an earlier period.  Again it was well played.

I enjoyed the way this concert was constructed with works from many styles which all related back to the influence of Mozart.  I especially liked hearing the Mozart concerto, a favorite.  Now that I understand that Arvo Pärt is a minimalist, I hope he will appear again for me.  Otherwise I only know about him from recordings.