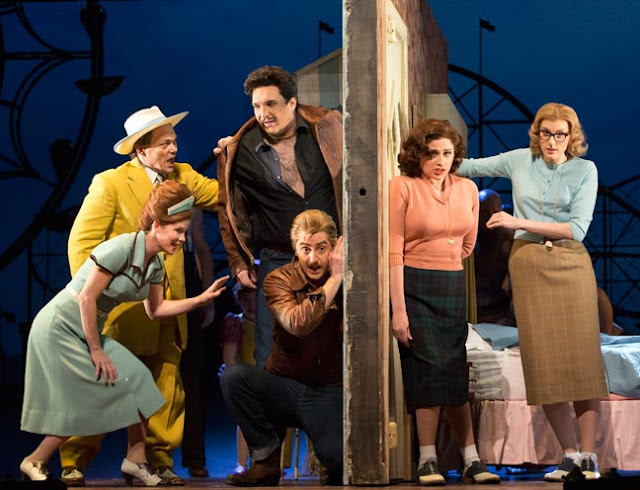 Two words:  saddle oxfords.  The sisters in Mozart's Cosi fan Tutte in HD from the Metropolitan Opera are on the right in outfits which were popular when I was in junior high school.  They look so fabulously authentic.  They are in a motel and Despina is the woman who cleans the rooms.

These two guys, Ferrando and Guglielmo, are in a bar with Don Alfonso, their older male friend. When they are just a bit too drunk, the younger men start to brag about the faithfulness of their fiancés, the two sisters Dorabella and Fiordiligi.  According to the guys, they are truly faithful. Don Alfonso says this is nonsense, that all women are fickle. He bets that their girlfriends are like all the others, and he will prove it. The two guys agree to test this. The two guys first appear in their naval officer uniforms, a touch that for me made all the difference.  These two young men might indeed be suddenly called off to war.

This production completely transformed my take on this opera.  It is important to remember that it is the young men's complete faith in their girl friends that makes any of this plausible.  In their military uniforms they obviously feel their young fiancés are too insignificant to jilt such important people as themselves.  They never seem to consider they might lose.  They do whatever Don Alfonso tells them and laugh at the results until it's too late.

My favorite thing about the production is the disguises, especially the mustacchi (mustaches) which make the young men look far more gorgeous than their stuffy military officer real selves.  Ferrando is completely transformed.  The disguises are always lame. 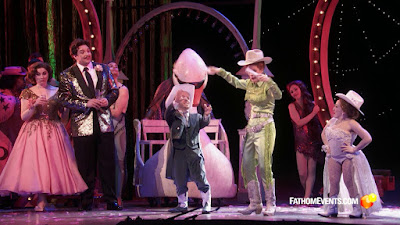 The circus performers were fun if sometimes a little overwhelming.  In the green outfit seen above is our Despina as the notary who brings the marriage certificates all the way from Texas.  This was the most fun of all with her Broadway dance number.  The entire production was complex and busy with virtually a set for each aria.  It made the whole thing a lot funnier.  It's a comedy.  We should laugh.

In the end Don Alfonso makes his case, but he realizes that Despina has done all the real work and gives her all the winnings.  New motto for Cosi fan Tutte:  Don't take your woman for granted.  My favorite Cosi ever.

I liked this for its take on the plot. Musically I have seen better.