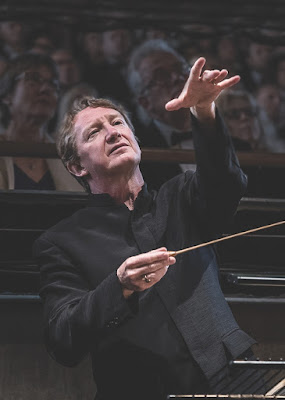 The latest performance of the Sacramento Philharmonic and Opera took place in the Cathedral of the Blessed Sacrament, a beautifully decorated space with the usual resonance found in large churches.  They did an excellent job of selecting repertoire that would withstand the echoes.

Our conductor was Douglas Boyd, a former oboist from the UK.  I enjoyed his work.

The concert began with Ralph Vaughan Williams Fantasia on a Theme by Thomas Tallis for post-romantic orchestra.  I am a great admirer of Vaughan Williams and was pleased to hear that they succeeded in developing the color and phrasing to make the piece soar.  With him it's all in how you perform him.  A British conductor performs a British work.

This was followed by a complete contrast:  Psalm Tunes for Archbishop Parker's Psalter, a piece for a cappella choir by Thomas Tallis.  One of the psalm tunes is the theme from the previous piece.  These are short pieces in English which one might expect to hear in an Anglican church.  Tallis composed for both Catholic and Protestant churches during the Tudor period in England.

We finished by combining the resources of both of the previous pieces to present the Gabriel Fauré Requiem.  In addition we enjoyed soloists baritone Timothy Murray, Liisa Davila soprano and Dan Flanagan violin.

Fauré worked as an organist in a church in Paris, and would have heard his Requiem in circumstances very much like this.  This was the highlight of the program.  I especially enjoyed "Pie Jesu" sung by Ms. Davila.

It was a very unusual program for a symphonic orchestra such as ours.