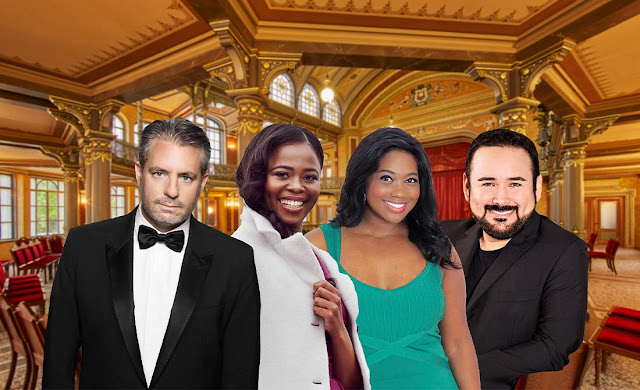 This wonderful Metropolitan Opera Gala concert came to us live from the Parktheater im Kurhaus Göggingen, in Augsburg, Germany.  I used to live near there.

“Lippen schweigen” from Lehár’s Die Lustige Witwe
Angel Blue, Matthew Polenzani    [Perhaps I would like this if Angel was the widow.]

Very nice.  All my favorite parts.  Lots of duets.  My emotions are getting the better of me.  I need more of all these people.  I sang along to Auld Lang Syne.  Love to all.

There has been controversy over this concert.  People argue that Met musicians should have been hired to accompany the singers instead of the Europeans, a pianist and a string ensemble.  The concert took place in Germany.  There would probably be two reasons for this:  1.  Live performances under controlled conditions are allowed in Germany, and 2. The singers are all in Europe where at least occasionally they can get gigs.  Javi is in Monaco and Madrid.  Pretty has been in Barcelona.  Angel will be in Berlin.  Matthew has been in Madrid.

Other factors concern the accompanying musicians.  It might not be possible for American musicians to just fly in to Germany and play there.  I am not happy about Gelb and his treatment of the marvelous Met orchestra, but I wouldn't have wanted to miss this beautiful concert.