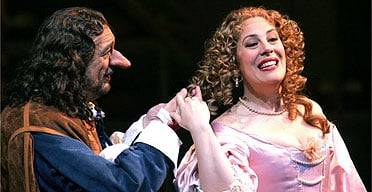 Cyrano de Bergerac is such a great play that it cannot help but make a pretty good opera. The libretto, in French, follows the play closely. Between 1921 when he composed La Leggenda di Sakùntala and 1936 for Cyrano Franco Alfano seems to have pulled himself together a bit. He used humming chorus only in the battle scene, for instance, where it serves a relevant dramatic function, instead of every time a little extra emotion is wanted. The scene where Cyrano serenades Roxane, sung by Sondra Radvanovsky, who thinks it is Christian and allows him into her bedroom while Cyrano stays below is actually very moving.

But he still has no idea of how to write an aria, and there are lots of opportunities. The sword fight poem in act I is an outstanding example of an opportunity missed. There is even a refrain where a catchy tune would go well. The words indicate a planned and eventually achieved execution of his opponent precisely at the end of the poem. This was completely flubbed both musically and dramatically. The whole idea is that Cyrano must stab his opponent precisely as he pronounces the last word of the poem--not pat him on the butt with his sword as happened here. I don't think you can stage Cyrano while pretending that people don't actually die in the sword fights.

This is exactly the same production and stars as the presentation at the Metropolitan Opera. I assume it was revived for Domingo.

And now I am going to do the unthinkable. Placido Domingo is one of those stars people travel the world to see. I sat next to one of his fans at the Royal Opera House on Thursday. She could not remember how many times she had seen him. He, the greatest singing actor possibly ever, is still beautiful in his soul, and occasional flashes of his genius still come to us. He executed his choreographed sword fights with acceptable grace.

Placido Domingo would never have become famous as a baritone--that part of his voice is just not that interesting--and yet he forces us to listen to page after page of music more suitable for a baritone because he cannot keep up the energy necessary to be a tenor in such a large role. Mr. Domingo, you have set the standard for all to follow, but perhaps it's time.

Dear B-
I saw Domingo do an all-too-brief turn as Siegmunde during the Valkyries at the Met's Ring two years ago.

He was just a magnificent specimen in every way. I'm no pro, but my friend was and is. She agreed he seemed totally at ease vocally. Sorry to hear that time has caught up with him.

I may have gone too far. It wouldn't be the first time. Siegmund is short and would not pose the problems Cyrano does. It's the first time I have ever felt that he sang badly. He needs to choose more wisely.