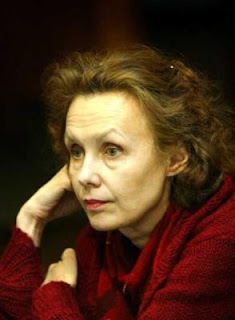 [This is also from Opernglas.]

Her newest projects lead the composer to Hamburg, Berlin and Luzern. In the discussion with our coworker Johannes Schmitz she revealed the first details of her third opera "Emilie" - written for a Star soprano - which will be given its first performance in the spring 2010. Selections from the interview.

JS: Frau Saariaho, your music seems to want to advance often into other dimensions of the perception, it can have something fantastic, a metaphysical, perhaps even religious level.

KS: Religious I would not say. Each art must have a mental level and music is for me the art form with the richest possibilities of communication. In music lies a very large secret, it can affect us deeply. In music are so many emotions, that we cannot control.

JS: In August at the season opening of the Berlin Philharmonic your new composition "Laterna Magica" will have its premiere. This composition has to do with Ingmar Bergman and also with the cinema?

KS: It is a metaphor. You know what a Laterna Magica is: the faster the pictures follow one another, the more constant is the movement. This idea was my starting point in order for me to make one think about the tempo in music and its perception. For me it was about the question of how the musical material behaves in different speeds. I came to this by the reading of the autobiography "Laterna Magica" by Ingmar Bergman, which I read in the summer two years ago, when he died. I had already written a lot of "Laterna Magica" before his death. It all came together: his way of describing the light, the way he used light and color in his work as a film director - and my work as a composer. In my thinking music has to do very much with light, and when orchestrating I think very strongly about the concept of colors.

JS: You have also written a new opera, your third after "L'amour de loin" and "Adriana mater." In March of the coming year is the premiere. Is the composition in the meantime complete?

KS: The score is present already, because I finished the work on it recently. It is a work for a single voice and carries the name "Emilie." I wrote this opera for Karita Mattila. But I would not like yet to actually tell much about it, because the team, which will produce the opera is naturally not yet so far.

JS: This Emilie du Chatelet, for many years the unmarried life partner of Voltaire, obviously led an unusually free life. She was well known as a female scientist and had also as a woman a very self-determined life, even to her sexuality. [?]

KS: She was a very passionate person. Her personality appears to me very rich - also with contradictions. That led to some very rich musical material. The personality of Emilie in my opera had to carry already alone, therefore, many contrasts in itself, since the piece is written for one voice only.

JS: The piece is not written for orchestra alone, but you return again to the use of electronic sounds as with "L'amour de loin."

KS: I work in "Emilie" with live electronics. But electronic is not for me an end in itself, it is simply a component of my art. The orchestra for ”Emilie“ is not fully realized: Initially I had a small chamber setting, that should reflect also a little the epoch in which Emilie lived. The harpsichord plays an important role in the instrumentation. But during the composition process I added the sound of more strings, also in order to carry over the power of Karita’s voice. Now the orchestra is approximately 35 persons strong.

JS: Let us again return to the historical person around whom your new opera turns. Is Emilie du Chatelet a kind of model for you personally, possibly for our time? Or are you interested less in the social, perhaps even sociopolitical dimension of the figure?

KS: Naturally I am also interested in this layer of Emilie as part of our life reality - and as part of my life reality, finally I am a woman. But it would reduce the figure very much, if I had pursued only such an intention. The social role of a woman is only one aspect of many. But in the long run my figures interest me more as human beings than as woman or man
Posted by Dr.B at 3:44 PM