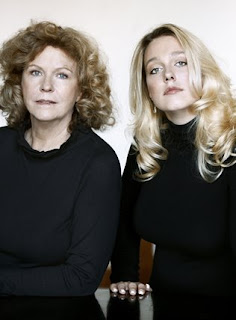 [Dr. B This interview is from the online version of Das Opernglas for July. I've done the best I can with the translation. These two women are now the head of the Festspielhaus in Bayreuth. I have left the title Frau since it does not really mean Mrs. A Frau is a grown up woman, a Fraeulein a young one.]

How does the new double head on the green hill function? Ralf Tiedemann visited the festival chiefs Eva Wagner-Pasquier and Katharina Wagner immediately after the signing of the agreement in May 2009 in their new offices. Selected bits from the discussion.

RT: To you both first of all congratulations on the assumption of the leadership of the Bayreuth festivals. The contracts were signed at the beginning of May, approximately eight months after you were officially designated as successors of your father. What was the reason in the end that it took so long?

KW: The large time interval is relatively easy to explain. Contract stories of this kind last always somewhat longer. In our specific case one must also consider that we have instead of as before one, now we have four partners. That is a new legal construction, with which all must be in agreement.

RT: Frau Wagner-Pasquier, since October 2007 you have radically opposed a double head with your half sister. In April 2008 it looked completely different. What has moved you to this to some extent spectacular 180-degree turn around?

EWP: The fact that I did not want to co-operate with Katharina appeared in the press. However, I cannot remember that I ever said that publicly in such a way. Through various circumstances, which developed in the past years, we were given the first chance to become acquainted with each other, leading to the development of this new constellation. That has to do with a great many private things, which do not turn on public events. There one quickly interprets somewhat wrong. We stated in the first months of our co-operation that we both are on a very good common path. That is the most important thing, and what one also expects from us.

RT: You have formulated a high requirement in your common concept: Until 2013 Bayreuth should be again the center of the Wagner attention. That will succeed only with a purposeful strategy in the quality assurance and - improvement of the two artistic main components - music and scene -. We begin with the musical one: Where do you see, Frau Wagner, specific needs for action within this area?

KW: As in every other opera house, as with us, many artists are already committed for the coming years. However, we see a need for improvement. Everything was not wrong that was made here, but there was certainly also some unfavorable things. We discuss at present, whom we want to engage in the future. Also with the conductors we want to achieve larger variety, so that we can experience a broad pallet interpretative meaning. But that is not under any circumstances a negative valuation of the conductors who have worked here!

I think, in musical regard one will notice the improvements relatively soon. Of the already contracted stage directors, there is no one that one would have to be ashamed of. Right now, while we speak, Hans Neuenfels is rehearsing below, and I can promise you that ”Lohengrin“ will be very exciting. Also Sebastian Baumgarten, who stages “Tannhäuser” in the following year, I am very excited about, because his work is always very much differentiated.

RT: You, Frau Wagner-Pasquier, are considered a proven judge of voices [Stimmenkennerin]. How do you estimate the current situation in the Wagner singing?

EWP: I must say completely honestly that I do not see so much difference between today and the time, when Wolfgang Windgassen or Astrid Varnay sang. Nowadays there are just as few Siegfrieds or Brünnhildes, as there were always few. On the other side today far more young singers have the chance to develop better - supports by many world-wide advancement programs. And we as organizers will find it far simpler to be attentive to talent, than thirty, forty years ago was the case. From here it I do not see larger doubts for the next years.

EWP: Who in former times was a star? Wagner careers run usually differently. Forest stage appearances [Waldbühnen-Auftritte] and promotional tours do not usually go together. One does not go to a ”Ring“ because a certain star sings.

EWP: Right. But that is an exception. Also a Waltraud Meier has surely her own fan club, which travels particularly for her appearances - including the husband of our chancellor. But in Bayreuth no more tickets were asked for when Domingo sang Parsifal here. On the other hand naturally also the Wagnerian looks up the stagings world-wide and notices if good, interesting singers are engaged.

RT: What does a production have to achieve in order to bring progress to Bayreuth?

KW: A production must be reference the piece and may not be popular. Otherwise in Bayreuth in principle the artistic freedom must also be protected. With the “Ring” the production question in the meantime has become very difficult, because interpretively already so insanely much has been made. The challenge does not become smaller for us by “the Wagner year” 2013. We are clear about the fact that Bayreuth must set an indication there and contribute something historical [?]. We have this requirement. We are in our considerations in addition, already a step further, and I hope that we will in the positive sense come to a surprising solution.

[Opera Chic has pictures of these ladies here.]
Posted by Dr.B at 12:49 PM