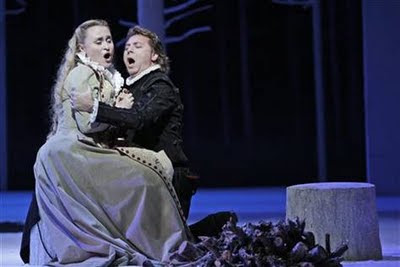 Verdi's gift--among others--was to find the personal in the political. The political plot of Don Carlo is about the power of the Inquisition over the King in sixteenth century Spain. We see the Inquisition burn people at the stake, and we hear of misery and mayhem in Flanders where Philip also rules.

But it is the personal that wins our hearts. My sense of this opera is that it does not work at all without the Fontainebleau scene at the beginning. In order to understand the characters we need to see Carlo and Elisabeth fall in love, to be young and impulsive, before we can grasp what happens to them. Hearing about it isn't enough.

The amazing thing about this opera is how every character is fully realized, with individual hopes and fears.

We see the power of Philip II, but we also see his sadness that his wife does not love him. We see Elisabeth torn between her love and her duty. We see Rodrigo's friendship with Carlo while he defends the king against him. We see Eboli's plot to destroy the queen and her later regret. Finally we see Carlo trying to rise above his fatal love.

All this detail also makes it Verdi's longest opera. Don Carlo exists in the largest number of versions of any Verdi opera. It was written for Paris where the audience has to be out in time to make the train home. Having once missed the last train in Paris, I know well what grief this can cause. So things are put in and then taken back out. Then it was translated into Italian, and the whole process started over.

It is a long, somber and ultimately very beautiful opera that grows on me with repeated viewings. Perhaps it is the wonderful performances in this Met production that win my heart.

The only interview that survived the encore cuts was the one with Roberto Alagna as Carlo. His only aria is in the often cut Fontainebleau scene, but he has many wonderful duets with Eboli, Rodrigo and Elisabeth. Would we want to miss where Roberto says duets are like making love, and host Deborah Voigt looks at the camera as if to say "He went there?" Priceless. Whatever he's doing works for me.

Marina Poplavskaya's Elisabeth is warm and inward. We see her impulsively fall for Carlo while remaining true to the unloved Philip.

Ferruccio Furlanetto's Philip remains a magnificent triumph. Keenlyside wins for acting, but Anna Smirnova not so much.

Many hold Don Carlo to be Verdi's greatest opera. It lacks a certain flash that we normally associate with Verdi, but it wears very well.

The last scene was accompanied by the 10 pm fireworks at the nearby State Fair.
Posted by Dr.B at 9:57 AM