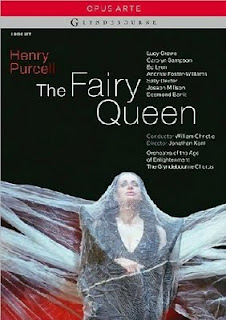 This DVD of Henry Purcell's The Fairy Queen from Glyndebourne, 2009, with William Christie conducting is a treat. Actually, it's my first experience of the English masque, a form that does not survive into the present. A theater like the Ulmer Theater could have done it, I suppose, but it would have taken all the employees and maybe a few outsiders. There is a full cast of actors who basically present Shakespeare's A Midsummer Night's Dream. Then there is a full orchestra, dance troupe and group of singers.

One aspect of the ensemble we could not have duplicated: their astounding physical beauty. The acting troupe who perform Pyramis and Thisbe were middle aged men, as usual, but everyone else was slim and gorgeous, including Adam and Eve dressed only in carefully placed fig leaves. You could honestly not tell the dancers from everyone else. You know this never happens at the opera.

The costumes were confusing. The fairies were dressed in black. Theseus was in 1690's attire. The lovers were dressed in a kind of romantic 30's look, while some ladies appeared dressed like 50's housewives. The beautiful naked pair put on clothing that made them look like hippies. You just have to go with it.

The masque is a rather formless form. Perhaps plays without music were no longer as popular as plays with music. In opera with spoken dialog, the dialog replaces the recitative of Italian opera. Here Shakespeare's lines are left spoken, and the added music is all to added text. It's just anything with dancing and singing, like Adam and Eve and people in bunny costumes. Apollo appears briefly, as well as spring, summer, fall and winter. The actual plot is all spoken. We of the more formal operatic tradition are frowning and looking down our noses.

I have long been a Purcell fan, and William Christie is a great representative for him. I think the arias are more florid than I expected, and filled with dotted rhythms. I love the middle baroque. Things are not quite formed, not quite slicked up as they are in Bach and Handel. The effect for me is one of unique freshness and charm.

So we should just lighten up and enjoy it. Recommended.
#ad

I must have been watching this and loving it at more or less the same time as you (in Rarotonga, which felt a little odd).

One thing I'd like to add is how genuinely funny the "mechanicals" were - Pyramus and Thisbe left me gasping with laughter.

I completely agree. It's the funniest I've seen.