The Pinnacle of Singing – Jonas Kaufmann 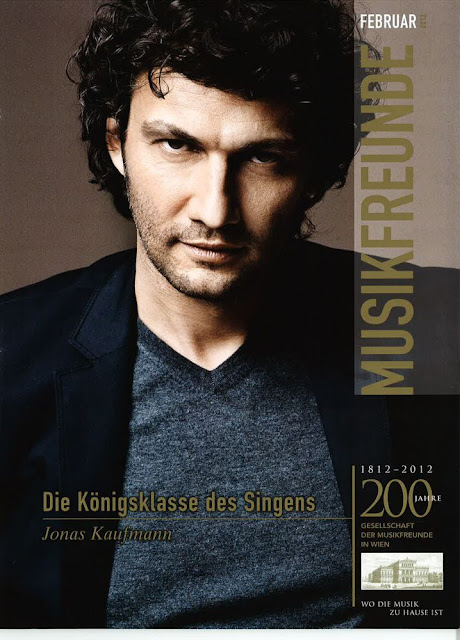 [This is an interview before Jonas' recital at the Musikverein in Vienna, translated from here. Thanks to Emilio for his help in translating "ersungen".]

For several years he is one of the giants of the music scene. In February Jonas Kaufmann is to be a guest at the Musikverein with a Liederabend. In his luggage, the celebrated Verdi and Wagner tenor this time has a rather quiet program.

In the world of opera, there are many clichés. One of them says that only Italian tenors bring sufficient luster for the Italian repertory - maybe even the Spanish-Mexican-Argentine. A second is that in Milan, New York or Paris one could not present to the audience a German as a Latin Lover. A Teuton to succeed internationally as Alfredo (La traviata) and Cavaradossi (Tosca)? Until a few years ago it was unimaginable.

Jonas Kaufmann then entered the international arena. Based in Zurich, where the Munich-born was since the turn of the millennium contracted to sing, he had continuously enriched his audience through singing. 2007 was his solo CD "Romantic Arias" on the market, three more have since followed. There are now a "Fidelio" recording under Claudio Abbado with him, and various DVDs: a "Tosca" from Zurich, a "Werther" in Paris, a "Lohengrin" in Munich and a "Carmen" from London. Even a biography has been published.

That the 42-year-old is an outstanding singer and actor, critics and fans agree. Besides that he also looks good, at least not detrimental to the career. No wonder that a critic of the New York Times recently attested laconically of the singer that he is "currently the hottest tenor in opera". A glance at Kaufmann's diary confirms this: The November and December 2011, he spends at the New York Metropolitan Opera, sings the title role in a new production of "Faust," in January there is a new "Don Carlo" at the Bavarian State Opera in Munich. The advantage of the Munich engagement: Kaufmann can finally sleep in his own bed once again - he lives with his wife, singer Margaret Joswig, and their three children after years in Switzerland, now back on the Isar.

On your program for the Musikverein are songs by Liszt, Mahler and Richard Strauss - and Henri Duparc (1848-1933), a friend of Camille Saint-Saens' and Ernest Chausson. Three well-known composers, and a relative unknown . What do you like about Duparc?

I think he's a very interesting but underrated composer who unfortunately has only written a few songs. The poems he set to music are, for the most part very expansive, very flowery, very dense atmosphere. And in combination with Duparc's music, these pieces seem so strong that one listening - or singing - believes that landscapes are to see and fragrances to smell. It is a very particular nature of Duparc, that after a few bars of a song, the specific atmosphere can feel almost palpable.

Do you have among the four, a favorite composer?

Even if these four approach very differently the setting of texts, they are all masterpieces in the genre of song composition. In this respect I do not want to have to choose a favorite composer. For Mahler, it is certainly the increased emotionality that attracts me as a singer in particular. With Liszt the piano virtuoso is of course always in the foreground, so chamber music and songs are often too short. His songs are not nearly as well known as they deserve because of his mastery. In Strauss I can as a tenor "tuck in" more than with other composers, which frankly for me is a lot of fun. But he has also repeatedly phrases, where you can paint with very fine colors. These contrasts feel like a great challenge to me. I also like many Strauss songs for a sense of humor, even self-irony.

You will be accompanied by Helmut Deutsch - you both have a long-standing cooperation. Deutsch has made music with you when you were still a student at the Munich Academy of Music.

Yes, he was my professor in the subject Lied, so we know each other for over twenty years. From the teacher-pupil ratio is then over the years a partnership that I find very harmonious. He's still my mentor in terms of Lieder singing: He has an invaluable wealth of knowledge of singing and song repertoire, from which I have benefitted for years and is basically the foundation of our program design.

They celebrate triumphs on the operatic stage. Why are you still excited by the - perhaps even more difficult - Lied?

Lieder singing to me is the pinnacle of singing. To make Lieder requires a high degree of technical skill and artistic sensibility, which in opera roles is not necessarily the case. As an operatic character one is part of a story; as a song singer, in one evening one tells about twenty different stories. It gives me immense pleasure to show in one evening so many different facets-linguistically, musically, stylistically and dramatically. The singer can work with much more subtle means, not least because the song focuses the attention of the audience to music and text.

On the opera stage, a singer working with a director and a conductor, he has also colleagues as supervisory body. How is this with the Lied? Do you have to fend for yourself?

Yes, as an opera singer, you are part of a larger whole, and you can make even a certain responsibility to the director or the conductor. As Lieder singer is one – together with the pianist - alone responsible. This is a much greater burden, but which, if everything goes well, will be rewarded with greater satisfaction. And what the "Supervisory Body" handles, recordings of rehearsals and concerts are always helpful for me.


Do you remember your debut in Vienna?

Of course! For me this was a great day. A "Fledermaus" at the Volksoper with Heinz Holecek as Frosch in 1997. I sang Alfred and was pretty excited because the Viennese audience is indeed, due to its professional knowledge and its strong interest in things artistic, by us singers equally loved and feared. My debut at the Staatsoper followed nine years later, on June 12, 2006, as Tamino in "Die Zauberflote".

Did you, like many students in Munich, in your study time go occasionally for concerts and operas to Vienna? Do you have memories of the Viennese musical life from the perspective of a spectator?


In my student days, it must have been in 1993, there was a special experience in Vienna, which has not been repeated in this way by luck. From Munich we went with the Bach Choir Fürstenfeldbruck to Vienna to give a performance of "St. John Passion." I should sing the Evangelist and the tenor arias. The whole ensemble took the bus there, and for some reason I took the night train. About an hour before the rehearsal I arrived in the morning at the West Bahnhof, took a taxi and said: "To Peter's Church, please!" Big question mark! The driver did not know Peter's Church, nor did his colleagues. In the days before GPS and cell phone of course we had no other choice than to constantly ask people and to follow some vague references. So we wandered through Vienna for some time, I got as it were a city tour of the most beautiful churches - Votive Church, St. Stephens Dom, etc. - until we finally found the Church of St. Peter. The rehearsal had already started, of course, all were sitting on pins and needles, waiting for me.

As a viewer I especially remember the Viennese New Year's concerts in the Musikverein. To watch television with the family, which belonged to us for New Year's Day just as the fir tree belongs to Christmas. And it was always a special experience: the magnificent hall, the Philharmonic, conductor like Boskovsky, Maazel, Karajan and Abbado, little extras like the gun shots in the Polka "On the Hunt", the beat of the music clapping audience at the "Radetzky March"- all had a very special character, and we children felt instinctively that classical music in Vienna has a stronger meaning than anywhere else in the world.

Does the coming song recital mark your debut at the Musikverein?

No, I have already sung concerts there, before my debut at the Staatsoper. But it's my first Liederabend at the Musikverein, and I am really looking forward to being allowed to sing Lieder in this room with the wonderful acoustic.

Does one dream of it sometimes as a student actually being allowed to sing one day in such historic rooms?

My daydreams as a singing student had relatively little to do with music, with even fewer career (laughs). But if I had asked a fairy godmother at the time in what houses I would like to sing, I would have named three magical places in the world of opera called La Scala, the Met and the Vienna State Opera.
Posted by Dr.B at 11:30 PM

"Ersungen" means that you have gained something through singing, for example Stolzing has "ersungen" Eva in the "Meistersänger von Nürnberg".
Greetings from Germany!

PS. It means "Meistersinger" of course, even if Meistersänger would be a correcter German!

i hate when people say he is not good enough for Italian rep:)
you seem to like his voice as much as I do :)