Why Do We Go to the Opera?

For this, oh yes, for this.

Hector Berlioz' Les Troyens was a work of love.  Virgil's Aenead was one of his favorite things from childhood.  You can tell this because he composes everything.  He can't bear to leave anything out.  He didn't seem to care how hard it was to get such a long opera produced.

At the San Francisco Opera in the best of all possible worlds we would have Luisotti for Italian and Runnicles for everything else, but the rules for opera management don't allow this.  We settle for Runnicles when it really counts.  For him also it was a work of love.  He presented this great masterpiece in triumphant style.  The emotional range was complete.  We love him and gave him the accolades he deserved.

And speaking of accolades, I don't think I've seen it here since Renata Tebaldi made her entrance in Andrea Chénier.  In act III Susan Graham entered at the back of the stage to significant applause.  We think of her as ours.

Les Troyens is 1858, two years before the start of the American civil war.  This seems to be the chosen era for the production.  The men usually appear in uniforms--blue and gray for the Trojans, red for the Greeks.  It's hard to place this in a specific time.  For one thing the uniforms are not very uniform.  And the women are dressed in a way that doesn't suggest any time period.  We see bows and arrows, but at one point we also see a long gun.  Perhaps war is all the same. 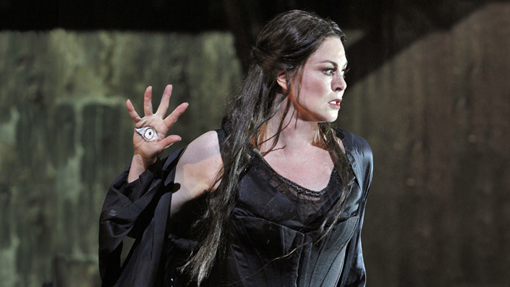 This is Antonacci as Cassandra.  Any guesses what the eyes on her palms are?

I could go on and on, but I find that I don't want to.  This was a genuinely great event, the reason for it all.  The production was full of irrelevant dancing, which for some reason I seemed to love.  I give the most credit to Runnicles for the perfection of the musical vision.  But all of the singing was gorgeous.  Bryan Hymel amazed us with his long held high note in his final aria.  When it happens, do you think it is too much, too corny, too show-offy?  Or do you let it sweep into your heart.  Everything worked together for joy.  We want magic, and this time we got it.

I can't sing any more, but my shouting is still pretty good.
Posted by Dr.B at 7:32 PM

I interpret the eyes on her palms as a symbol of her being able to see the reality of the Trojan horse as a hidden weapon, while all others are blinded by their own hope of victory.