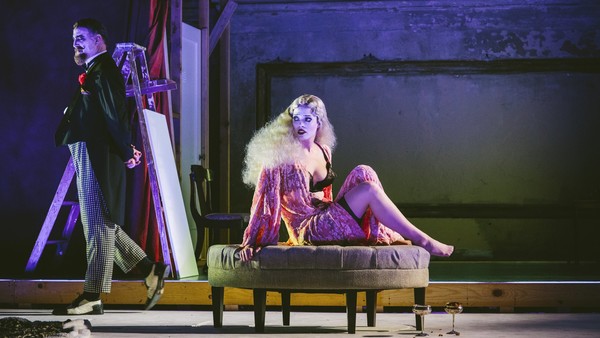 Saturday night was the opening of Berg's Lulu from the West Edge Opera.  It was presented in the abandoned train station near the tracks in Oakland and was in German. 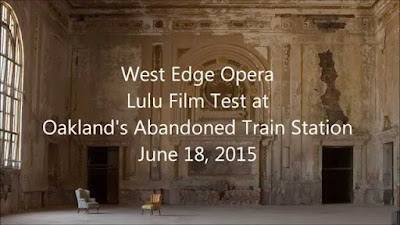 It could be said that I have been in search of Lulu (see Barbara Hannigan review, see Christine Schaefer review).  Perhaps Lulu is woman, at least woman from a man's perspective.  Occasionally different productions play out the story a bit differently.  In Barbara Hannigan's Lulu I clearly thought that Dr. Schoen wanted Lulu to shoot him, but clearly in this version he wants her to shoot herself so he will not have to go to prison for her death.  She shoots him instead.  Maybe I should watch it again.

West Edge can be very proud of this Lulu.  They held back nothing.  The sexual intensity up to the time Lulu is arrested for murdering Dr. Schoen is spectacular and includes many sexual encounters. Emma McNairy is a brave and talented young woman.  Philip Skinner has a Bay Area following.

Lulu has so many costume changes that she is assigned a dresser who follows her about the stage. When I look in Wikipedia, I see the dresser listed as a character.  Perhaps the ones I've seen don't feature all these different looks.

It was extremely well done, but nevertheless with some problems.  The severely reduced orchestra seemed to work well in the parts of the score that are by Berg, but seemed fairly uninteresting in the last two scenes which were orchestrated entirely by Friedrich Cerha.  After her time in jail, Lulu seems to acquire maturity.

Lulu is growing on me.  I am gradually coming to the feeling that it is a 20th century masterpiece.  Forgive me if I am slow in arriving at this opinion.  This particular one is spectacular.

Carping: I would like to see this in a real theater.

Have you seen the Bayerische Staatsoper production yet? I would love to read your thoughts about it. http://www.medici.tv/#!/lulu-berg-bayerische-staatsoper

I thought it was gone forever.

I watched a few minutes of it. It looked very dull and drab compared to the West Edge version. I don't think I can look at it right now.