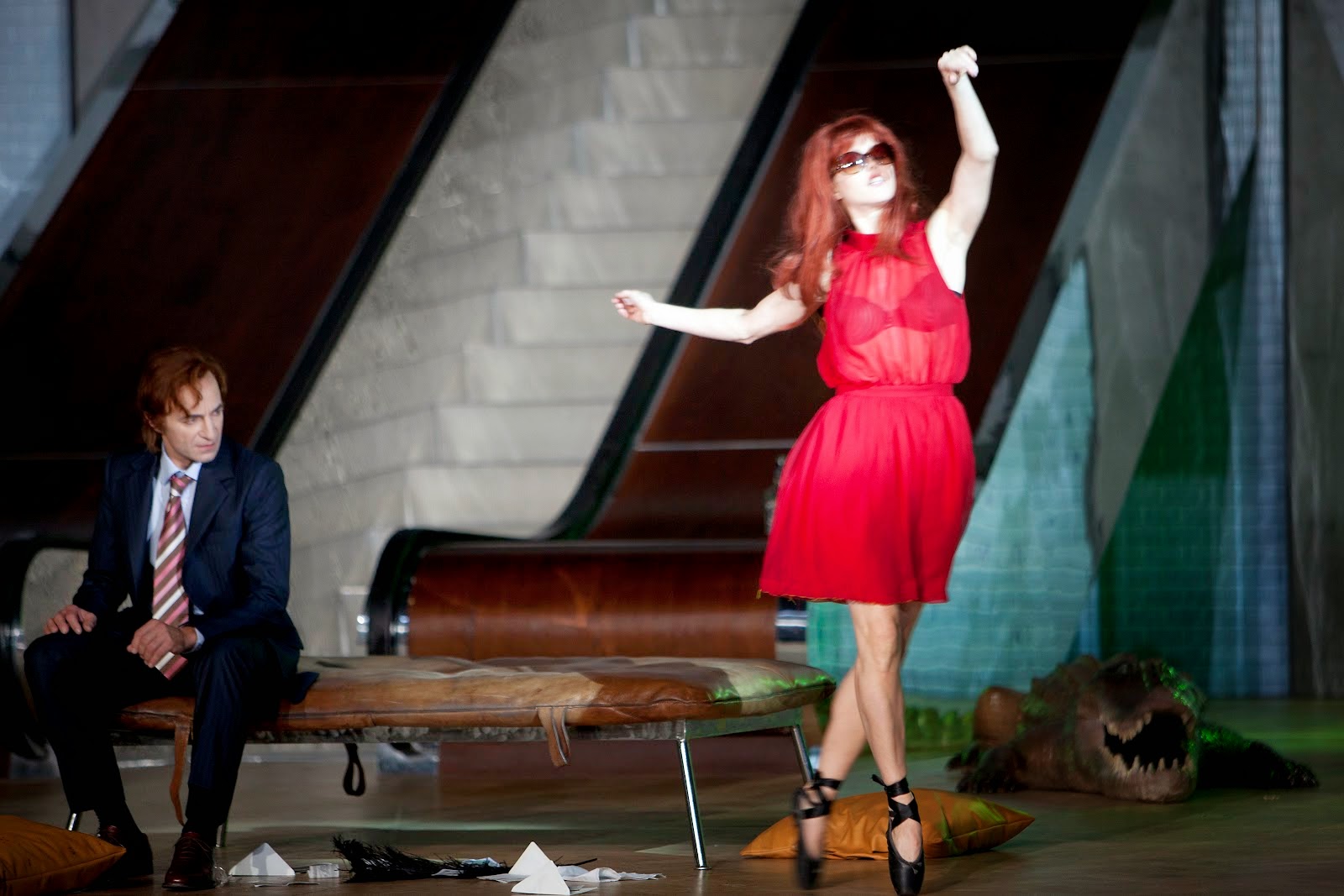 Two of my Lulus kind of ran the gamut:  the wildly voracious Evelyn Lear and the entirely passive Ann Panagulias.  Lulu is woman, a creature who fills man's imagination and becomes the sum of his desires.

In this version of Alban Berg's Lulu from Théâtre Royal de la Monnaie in Brussels, part II of the Barbara Hannigan film festival, a specific interpretation is offered.  Before the composed prologue is a spoken English language preface that relates the myth of Lilith, the first woman created by God who refused her position of subservience to man and was replaced by Eve.

So when we reach the prologue at the beginning of Lulu, and Lulu is introduced last in the menagerie as the snake, we recognize that she has been assigned the position of temptress in the Garden of Eden, she who leads Adam and Eve out of paradise.  At this point she is still a child, easily recognized by her long red hair.  She is already in childhood a dancer and can already dance en pointe.  The transition from Lilith to Lulu is very smooth.

In Act I she is already married to a rich medical doctor.  She begins her characterization clad only in her underwear and ballet shoes, dancing en pointe. A photographer photographs her with the animals in the menagerie.  For some unknown reason there is a wheelchair and crutches.  Her husband catches them together and dies of a heart attack.  So now she is rich.

In scene 2 she is married to the photographer, and their pictures are selling well.  Lulu still wears her ballet shoes.  Every so often she pulls down his pants.  "It has been so long since I danced."  She never seems to get tired dancing and singing on her toes.  Lest we think she is miraculous in some ways, her German is mediocre.

Dr. Schön and the photographer argue over her name.  Mignon?  Nelly?  Eva?  Lulu has taken off her ballet shoes.  Her husband slits his throat after talking to Dr. Schön who should have kept his mouth shut.

Alwa arrives, then a ballet troupe of children who stare at the dead photographer on the floor.  Lulu puts her shoes back on, for Alwa has arranged for her to fulfill her greatest dream of becoming a ballerina.  A dresser helps her into her ballet costume.  She is dancing, all are loving it, until she sees Dr. Schön and his fiance, when she faints.  There's a prince who wants to take her to Africa.  I have seen all this 3 times before but have never been so engaged in the story.

The story is, apparently, that Dr. Schön met Lulu when she was trying to pick his pocket.  He fell for her but had a more "anstaendige Frau" that he was engaged to and kept marrying Lulu off to other men.  He doesn't want his fiance to know about her.  An "anstaendige Frau" does not exactly have an English equivalent.  A woman is "anstaendig" or she isn't.  Proper.  Decent.  Honorable.  Your gentleman son could marry her.  That sort of thing.  Obviously Lulu isn't.

A dancer dressed as Lulu comes out and does a soundless dying swan ballet, removing her top, and letting down her hair before falling dead on the floor. Stunning.  Lulu watches from the wings.  This version of Lulu is very strenuous, but you could not ask this dance, too.  What an amazing thing this is.

Act II begins in the same set.  Lulu's hair is now silver, and she is seen taking off her ballet shoes.  In the menagerie cages is someone who looks like her but with auburn hair.  Countess Geschwitz is there and invites Lulu to a party.  She hopes Lulu will come dressed as a man.  Lulu is now married to Dr. Schön who complains constantly.  She looks like the child in the prelude.  He has a gun and holds it to his head.

Dr. Schön changes Lulu into a red dress with gold shoes.  There follows a confusing scene where people come and go declaring that they wish they had married Lulu.  Alwa enters and has a long conversation with Lulu--they are brother and sister, lovers, we don't quite know what.  Dr. Schön, who is Alwa's father, waves his gun around.  In the middle of this scene Lulu says to Alwa apropos of nothing, "Ich habe deine Mutter vergiftet.  I poisoned your mother."  All are obsessed with Lulu, including Lulu herself.  She makes a long Lilith-like speech and shoots him.  Then she says, "The only man I ever loved" and worries that she will be thrown out of school.  Countess Geschwitz watches all this.  Alwa comes back in time to see the murder.

The child dancer from the prelude appears, and the interlude between scene 1 and scene 2 is her plus the Lulu in the menagerie dancing.

Lulu is in jail.

Who is Lulu?  Does the fact that all are fascinated by her define who she is?  He wanted her to kill him, and she did. Everything in this opera is about Lulu.  Her doppelganger is seen constantly inside the menagerie mimicking her actions.  Her child self dances.  A screen appears and shows films of her, perhaps created by the photographer from act I.

Countess Geschwitz has had cholera and is a blonde now.  She sits in the wheelchair from Act I.  She has successfully executed her plan to pass herself off as Lulu and get Lulu freed from prison.  Lulu limps in on the crutches, and they plan to get her out of the country.  As soon as the athlete is gone, she throws off her crutches and her hospital gown and celebrates her freedom.

And here for its first 40 years the opera ended.  It is not an entirely unsatisfactory ending.

My own intermission:  I am enjoying very much watching this and writing about it.  I have never been particularly attracted to Wozzeck, a story about a man forced to eat nothing but beans.  Lulu is another matter.  The music, always uniquely Berg-like, moves smoothly from speech to Sprechstimme, to recitative, to pointillist aria.  Barbara Hannigan makes it all look easy.  It is a spectacular performance from any perspective, impossibly lyrical.  Lulu is merely living her life independent of the swirl of passion around her, caring about dancing, outfits and furniture, like hundreds of women you know.

It is Lulu's 27th birthday and we are counting the lighting of her birthday candles.  Lulu is living under an assumed name in Paris.  Countess Geschwitz is there, Alwa is there, the narrator who has been with us from the beginning is there, the athlete is there, Schigolch is there, the child Lulu is there.  They discuss a stock they are all invested in.  Lulu herself appears to be stoned and passes out.  The little girl dance troupe is in the menagerie.  Lulu is a mess.

The orchestration here is quite fascinating.  We are in the part not orchestrated by Berg.

Lulu is chopping off her hair in preparation for fleeing.  The shares have collapsed.  The candles of the birthday cake are still burning, and the children blow them all out.  Lulu and Alwa get away.

Lulu has fled to London where she has married Alwa (4th husband).  She has short blonde hair and wears her dancing shoes and a tutu.  She tries to dance but is bad at it.  Child Lulu is still with her.

I can see that one might prefer a Lulu that ends with her getting out of prison.  While he was alive, Dr. Schön protected Lulu, but now that he is dead everyone else fails in this vital task.  She becomes a prostitute, and as her third trick she meets a man who looks like the beloved Dr. Schön.  He kills her.  The child Lulu stays with her to the end.

The repetitive visual elements--the child Lulu, the children's ballet troupe, both things that are not actually part of the story, and the scale covered narrator--overwhelm and obscure the actual characters.  We see perhaps more vividly than before the destruction Lulu.

One Lulu in 5 years is perhaps enough.
#ad

Hello. I'm the owner of the blog http://greatestoperasingers.blogspot.com/
I have a request, is it possible to exchange links of our sites by addiding in the links' section.
All the best
Ash