I saw this streamed on medici.tv before going to Salzburg in the Verdi year, 2013, and now I am finally viewing the DVD.  This opera is very complex, and I think it benefits from multiple viewings.  Watching it again I feel less puzzled by events than when I previously reviewed it.  There was a period of about 50 years when no one performed Don Carlo at all, but now it is considered one of Verdi's greatest operas.  I'm going to try to explain it. 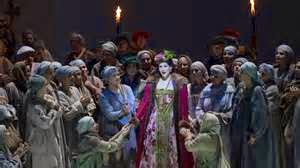 Act 1.  Scene 1. The Forest of Fontainebleau, France in winter

I love this scene and cannot imagine the opera without it.  It establishes the relationship between Carlo and Elisabetta.  They think they will be married, as they have been betrothed from a distance, and fall instantly in love.  However, the scene begins with a chorus of complaining peasants.  The plot has to do with Spain and Flanders, so complaining French peasants never come up again.  Perhaps they are included to show how they love Elisabetta.  Or they just wanted an excuse for a chorus at the start.

The scene ends with the announcement that Elisabetta will marry Philip II, king of Spain, and not Carlo, as part of a peace treaty between Spain and France.  She takes it better than he does.  Anja Harteros appears in an outfit that isn't black.  A lot of fun was made of her outfit on social media, especially the hat.  This scene also includes Carlo's only real aria which Jonas Kaufmann aces, of course. 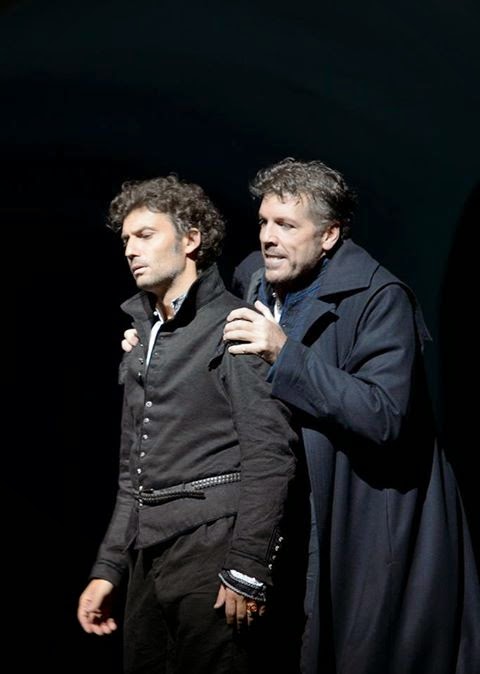 Act 2.  Scene 2: The monastery of Saint-Just in Spain

Sometimes the opera starts here.  Don Carlo meets with his friend Posa, sung by Thomas Hampson.  Carlo wants to talk about Elisabetta, and Posa wants to talk about conditions in Flanders where the Catholic Philip II is persecuting the Lutherans of Flanders.  They sing the gorgeous friends duet. 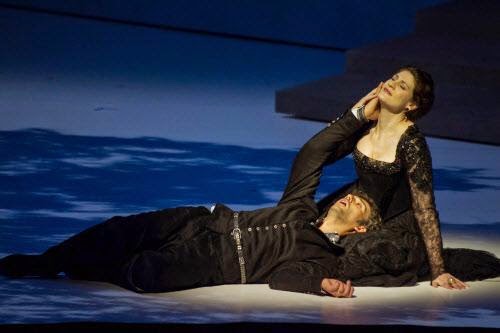 Scene 3: A garden near Saint-Just

Elisabetta is with her ladies in waiting.  Eboli, sung by Ekaterina Semenchuk, is introduced with a song.  Posa and Eboli help to arrange for Carlo to be alone with Elisabetta, and a rather torrid love scene ensues.  They are rolling around on the floor and Elisabetta says, "so you want to kill your father and marry your mother."  This cools him off, and he leaves.  The king enters and is furious because the queen has been left alone.  He sends one of her women back to France.

The king in this production is played by Matti Salminen who can project more nastiness on the stage than just about anyone. In real life Philip II is supposed to have been a nice guy.  Real life is only marginally relevant in an opera. 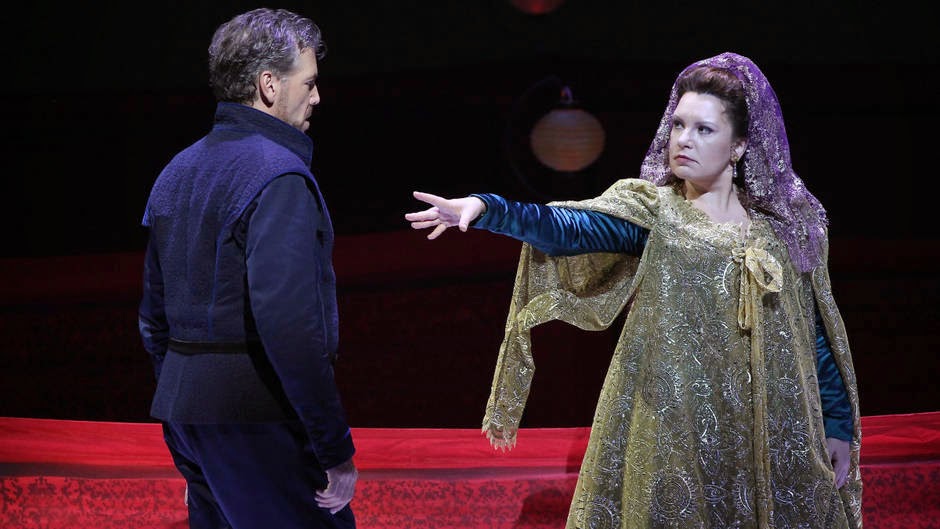 Act 3.  Scene 4: Evening in the Queen's garden in Madrid

I liked very much the way this was staged.  The celebration of the anniversary of the ascension of Philip II to the throne of Spain has begun.  We hear celebratory music and see costumes and decorations that resemble carnival, including masks.  The queen and Eboli appear, the queen complains that she is tired and wants to go pray, and asks Eboli to take her place at the celebration.  She removes her outer garments, including a head piece, and Eboli puts them on.  Elisabetta leaves.

Eboli writes a note for Carlo, and he enters thinking Eboli is Elisabetta.  This is much clearer if we have just seen them exchange clothing.  Carlo is passionate until he realizes it is actually Eboli.  Eboli is not happy with this, as she is in love with Carlo.  Posa enters, Eboli threatens to rat on Carlo, and Posa tries to stab her.  Carlo prevents this, but Eboli is still angry.  There is an extended trio with a lot of intensity.  The titles can only tell what one person is saying.  To know what all three are saying requires a libretto, which the DVD does not provide. 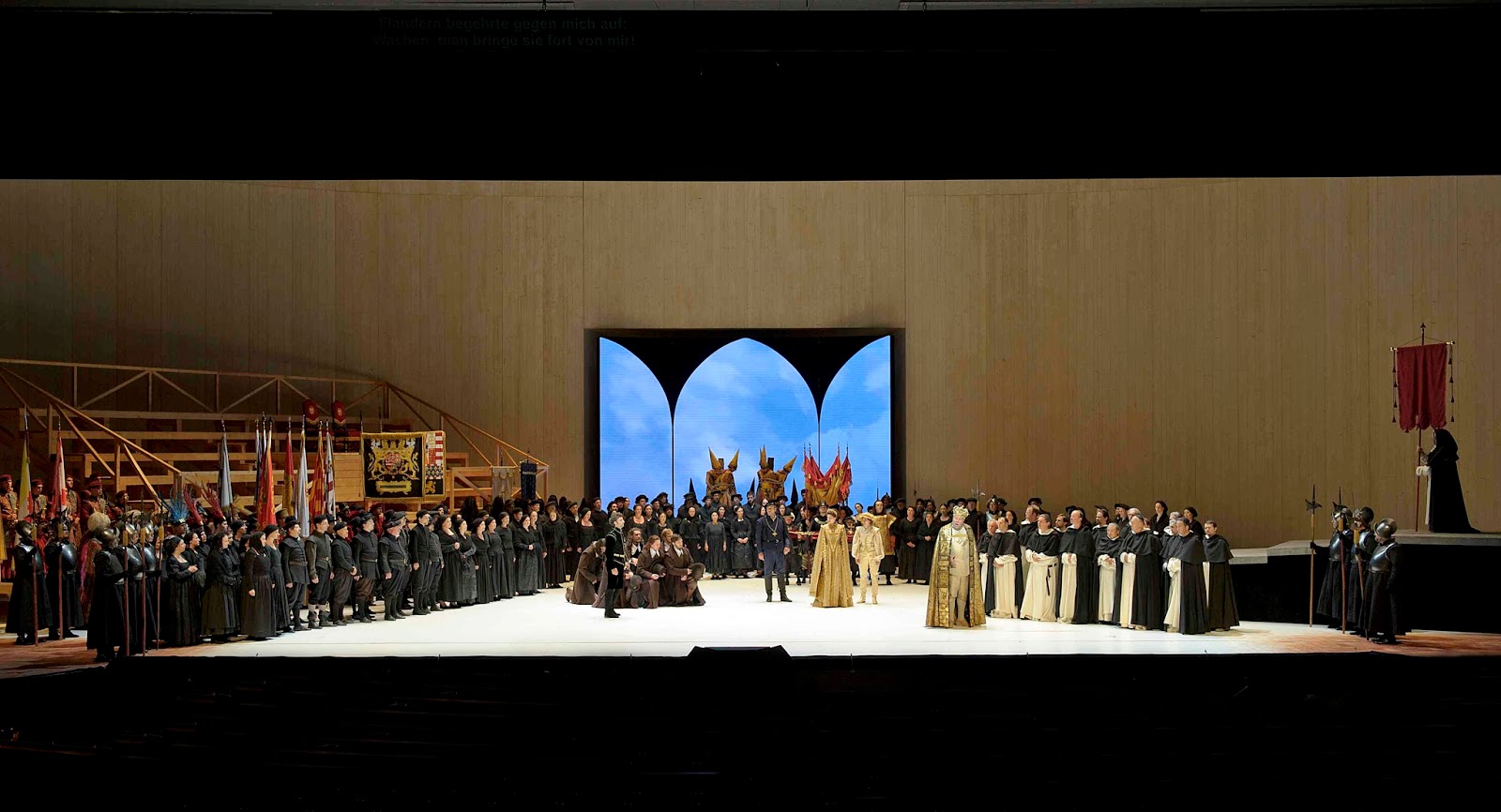 Scene 5: In front of the Cathedral of Valladolid

This is called the "Auto-da-fé" or "act of faith" scene and features the burning of heretics condemned by the Inquisition.  I have seen this scene several times and find it extremely confusing.  The events go:  heretics are dragged in; Flemish ambassadors appear and plead their case to the king with Posa and Carlo arguing on their side (shown above); the king refuses their plea and has them arrested and taken away; Carlo gets angry, pulls his sword and threatens the king; no one will confront Carlo until Posa steps forward and orders Carlo to give him his sword; Carlo obeys and the king immediately makes Posa a Duke and has Carlo arrested.  Finally the king and queen take their places and the heretics are burned.

Until just this minute I have thought that the burning of the heretics and the refusal of the Flemish ambassadors were somehow related.  Now I see that this is not the case.  Why include anything so completely grotesque as a human execution by burning?  Isn't the plot the same without it?  The burning is apparently part of the celebration which began in the previous scene.  We want everyone to be happy and entertained so we burn a few people.  Something like the Roman games.  It also shows the king's obedience to the Inquisition.  At least they've staged it in a subdued way with the heretics at the back of the stage.  This is sensationalist BS. 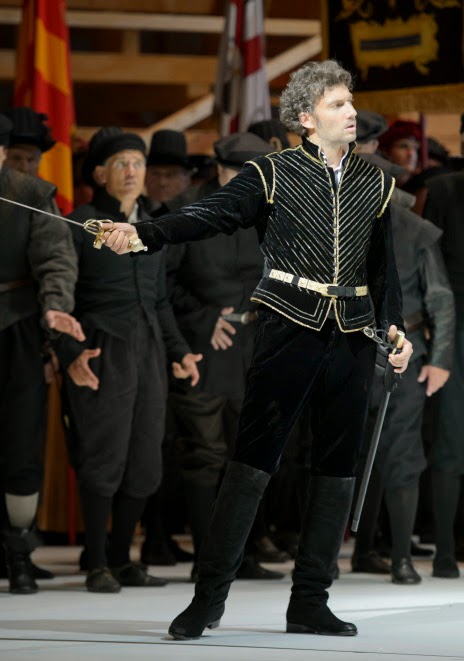 The confrontation between Carlo and Posa is also confusing.  I guess Posa thinks that Carlo is out of control and should not kill the king.  Confronting him is the only way to prevent it.  The important point is that it isn't a betrayal of Carlo by Posa.  He isn't plotting against Carlo. Posa is interested in Flanders and does not wish to harm either Carlo or the king.  Carlo is still suspicious of him. 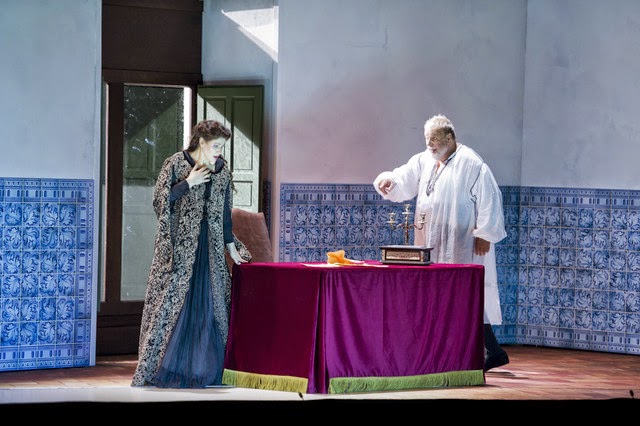 The king is sitting alone in his study lamenting that his wife does not love him.  He has been given her jewelry case with the miniature of Carlo that he gave her in the first scene.  So if there is no first scene, what the hell is this?  I am used to Ferruccio Furlanetto doing this scene. Matti is very intense.

Just to keep things confusing there is also a scene with the Grand Inquisitor who reminds the king that he, the inquisitor, has more power and must be obeyed.  He burns people at the stake so everyone is afraid of him.  He demands that Posa be killed because he wants the Lutherans in Flanders to be persecuted.  The king regards him as his friend and refuses.

Elisabetta enters and the king confronts her about the portrait.  She faints.  This is the female version of when in doubt punt.  If things aren't going well, faint.  Eboli and Posa are also in this scene.  When Elisabetta wakens, Eboli admits that it was she who gave the jewelry box to the king.  Everyone else leaves, and Eboli sings her big aria "O don fatale."  She vows to try to save Carlo.

The music of this scene is particularly beautiful.  It deals with both politics and true emotions. 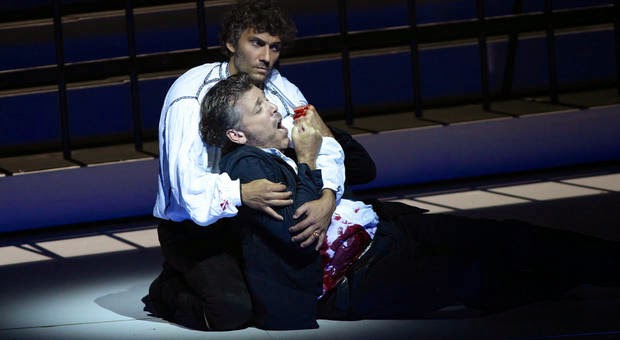 Posa visits Carlo in jail where a shadowy figure kills him.  I don't seem to have ever known what was going on here except that Posa dies.  The question is who killed Posa?  We see two men, both in dark robes, one with a soldier's helmet and one with a hood.  The one in the helmet shoots Posa.  Did the king give in to the Grand Inquisitor or did the Grand Inquisitor take care of matters on his own?

Hampson struggles with the heavier parts of this scene but excels at the sweeter parts.  He dies in close-up, very nicely.  Carlo cries.  Philip comes in bragging that he has killed him.  Carlo curses him.  Such emotion.  Kaufmann is magnificent in his anger; his intensity is the secret of his fame.

A crowd forms wanting to overthrow the king for killing Posa, but the Grand Inquisitor intervenes.  There is no hint about how Carlo escapes in this staging.  At the end of the scene he is still in the prison. 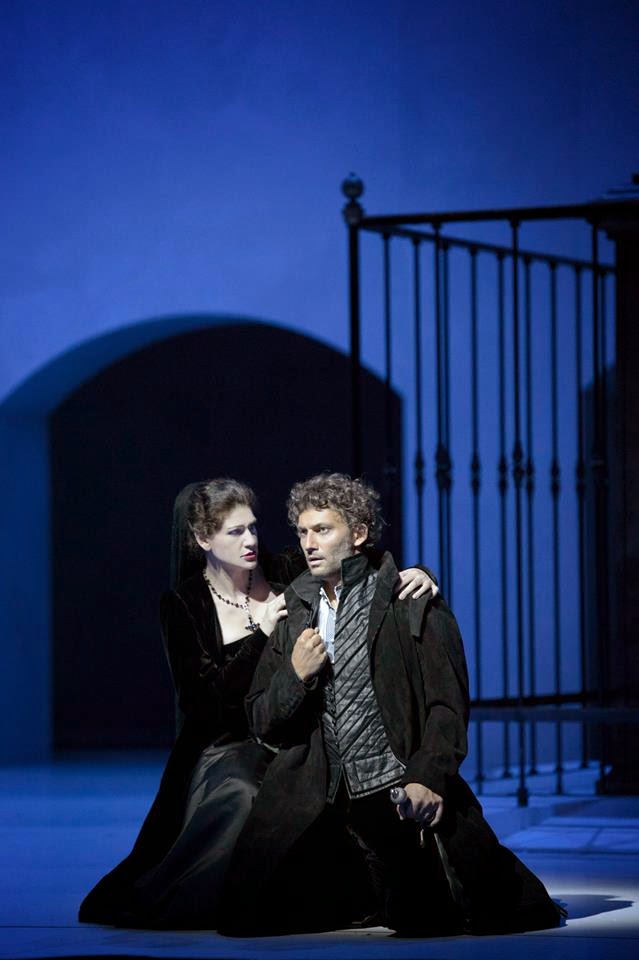 We were here in scene 2.  There's a huge duet between Elisabetta and Carlo.  Musically this is the best part of the opera, and these two do it proud.  There is nothing in this staging that hints at Eboli having a role in rescuing Carlo.  When the queen and Carlo meet, he is leaving Spain.  He is rescued by the ghost of his grandfather and disappears, we assume for Flanders.  It is a customary operatic deus ex machina.  King Charles is made up to look like a bronze statue.

This opera is a patchwork, a many times reworked patchwork.  We put in some stuff.  We take some of it out.  We put in some more.  Etc.  We love the music, so we don't mind so much that the story is so disorganized.  In contrast La Forza del Destino is much easier to follow but is implausible.

I love this opera very much, and it is all here with this cast.  Together they are magic.  This is simply wonderful.  Have I ever seen a Verdi Don Carlo that was so wonderful as this?  Addio per sempre.
#ad