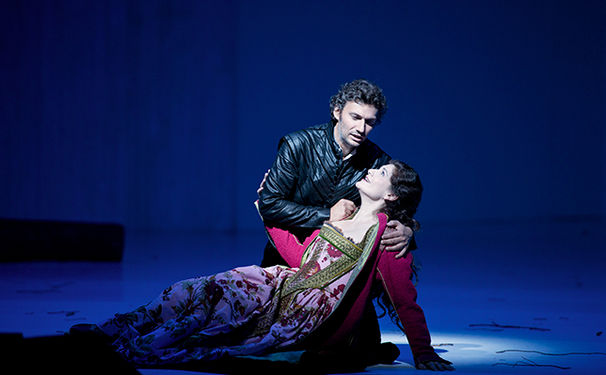 👍🏻
In a week I will be traveling to Salzburg for the last week of the festival, but since my tour didn't include Verdi's Don Carlo, I thought medici.tv was the way to go.  I forgot that the live streams don't include subtitles.  If and when the stream reappears as a film on medici.tv, subtitles will undoubtedly be added.

What an astounding cast.  Eric Halfvarson was the only repeat from the Met simulcast.  This performance is above all a masterpiece of casting.  Pereira knows all of them from Zurich.  And Pappano and the staff bring each of them to the peak of intensity.  I am feeling numb and speechless.

The opera is about politics.  The Catholic Spain has conquered Protestant Flanders and is ruling it with an iron hand.  The Inquisition is merciless against them.  Philip II shows his bias in his friendship with the Grand Inquisitor.  Carlo and Rodrigo band together to speak for the side of Protestant freedom.

There is a wonderful duet with Hampson and Kaufmann where they sing of their friendship.  They are marvelous together.  Hampson is vocally and emotionally just right for Rodrigo.  He projects a certain softness that is very much the character of Rodrigo.

Their defense of the people of Flanders has no effect.  Rodrigo argues for Carlo as governor of Flanders.  All is a failure, and the prisoners are burned on the stage.

The opera is about the conflict between love and duty.  Carlo and Elisabeth meet in the forest in France and fall in love when they realize they are destined to marry.  Then politics changes everything--Elisabeth marries Philip II instead.  She accepts this reversal of fortune much better than he.

Carlo is a role that consists primarily of duets.  Kaufmann is by now very much accustomed to singing with Harteros.  Both sing big which is exactly right for Verdi.  And both can.  To be completely honest, he is working a lot harder at it than she is.  Her voice simply is that big.  They bring an almost magical balance of voice, stature and emotion when they work together.

When Rodrigo finds out that Carlo is in love with Elisabeth, he betrays him.  The plot is not the same without this betrayal which I simply cannot understand.  Why would he do this?  When the betrayal brings him the favor of Philip, he refuses it.  When Carlo is imprisoned, Rodrigo says he will die for him, and then actually does.  More beautiful duets.

This is exactly how I want my Verdi. My dears, this is what it is about.  What makes a great opera?  Those people you see standing there.  Their voices, their bodies, their souls, their hearts.  A production that explains what they are doing there together and never distracts you from them.  And Verdi.  Why do the Italians adore him so?  Because the best Verdi is the best anything.

With this cast and this conductor it had an intensity and excitement that I have rarely seen in my years as an opera goer.  My sense of this opera is transformed.
Posted by Dr.B at 10:07 PM