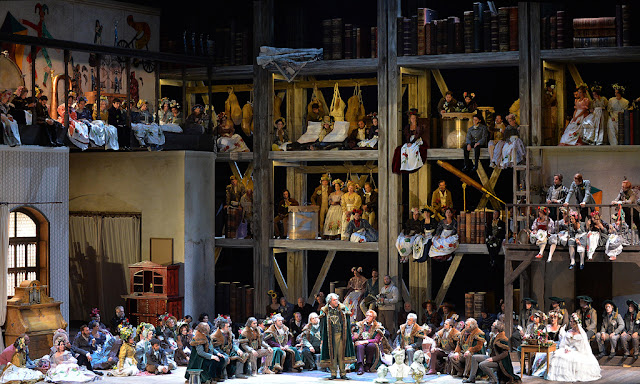 The production of Die Meistersinger von Nürnberg at the Salzburg Festival takes place in Hans Sachs's mind. I can reach no other conclusion. He clearly loves Eva very much and then imagines a young knight for her to marry. If you came to this version from the Bayreuth version, as I recently have (see here), you might wonder what opera you were seeing. This version is much more traditional.

Only one bit I liked better in the Bayreuth version--when Walther rejects the Meister robes, in Bayreuth he has just signed for millions to become a rock star. Here he just thinks he's too good for it. This provides Sachs with the opportunity to praise German art.

The story doesn't really emphasize Sachs until the middle of the second act. Have I imagined the opening scene is usually cut?

Sachs, sung by Michael Volle, is everything here. He laughs. He cries. He falls down in terror or in sorrow. He embraces his Eva and then gives her away to another. I have tried to imagine this production without Michael and simply cannot. He receives the highest accolade--I have simply never before cried at Meistersinger. The first scene of the third act was especially intense.

So it is Sachs himself who imagines the glorious song that wins the prize. Doesn't that make more sense?

Roberto Sacca as Walther sang the prize song well, but was not so good elsewhere. I still remember him as a lyric tenor. If we are to make him a blond, he could perhaps have bigger hair.

Anna Gabler as Eva was beautiful and very passionate.

The audience booed Daniele Gatti, the conductor, and the mediocre-sounding orchestra by implication.  Since I am more inclined to like Meistersinger, I would consider it a flaw that the music did not sound as I expected. But my heart was only for Michael.

I loved tis production--watched it on live stream and looking forward to Mr. Volle's Mandryka at the Met next year. One small thing--I think Act III takes place not in Sachs' mind but in Beckmesser's.

I adored this too. Since it's apparently coming to the Met, it would please me no end for them to cast Volle as Sachs. (And JK as Walther...probably only in my fantasies.)

I need to see this again, but my impression was that the opera is Sach's dream, and Bechmesser may be another aspect of Sach's mind/personality.

Or maybe lack of sleep is finally catching up with me.