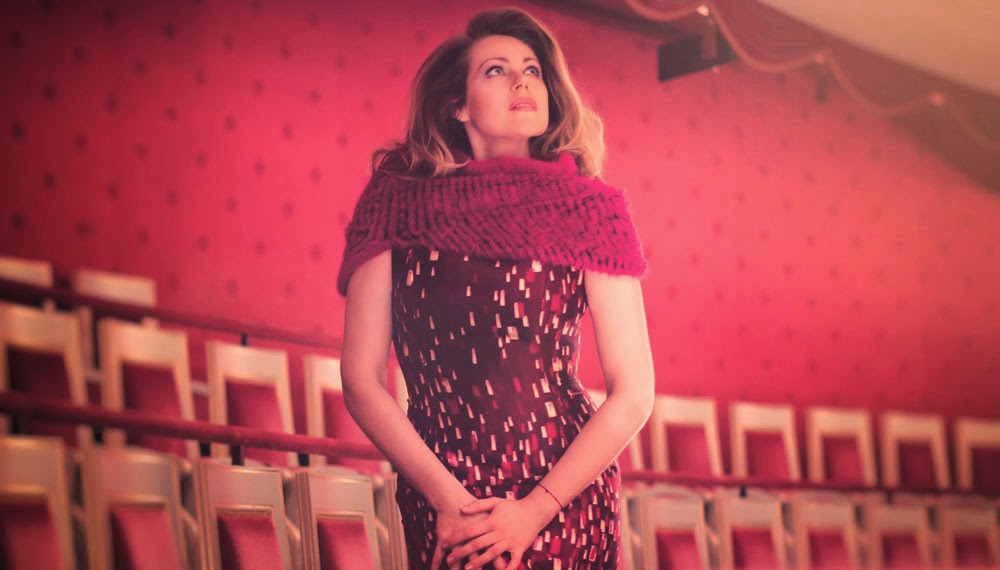 This is one of my usual translations.  The title means the woman who jumps in.  The original article comes from Crescendo:

Even though Kristine Opolais is already a big star in Covent Garden and the Metropolitan Opera, she still jumps in spontaneously for ill or stricken colleagues. We met the Latvian soprano for an interview and saw a woman who is full of energy, but is still looking for her perfect role.

On a cold Shrove Tuesday, deep within the walls of the Bavarian State Opera, we wait on Kristine Opolais in a bare, big room with a dressing table, a piano and a comfortable seating area. Suddenly she rushes in, apologizing profusely for being late, and orders three bottles of water - an annoying cold makes the Latvian soprano need this, as the voice requires plenty of fluid. When her vocal cords are lubricated enough, we can begin.

crescendo: Ms Opolais, originally you wanted to be a pop singer. What went wrong?

Kristine Opolais: Actually, it was only one of many wishes. I wanted to just stand on stage, strictly speaking, I just had to be on stage - so much energy as I had at the time. But I had actually never intended to be an opera singer. That was my mother's idea.

When were you on stage for the first time?

As a teenager. In the small country where I was born, there was a competition for girls - a bit like "Miss America". In a job, you had to show something, and I just sang. My mother, who was sitting in the audience said afterwards, I absolutely had to study classical music. For me it was a disaster, as you can imagine: Only sixteen years old and already doomed to a lifetime of singing opera! Opera singers - these are those obese women with loud voices. I just had my own ideas, which were admittedly quite far away from reality. At sixteen, one is still very dependent on the visual, because I could not understand what emotional depth that kind of music might have.

Your mother had actually decided that you would go to the conservatory?

It was her decision, yes. She even wanted to be an opera singer herself. And you know what I mean: When parents for any reason cannot satisfy this or that dream, then they transfer these unfulfilled wishes to their children.

When did you finally became a friend of the opera?

There is actually a specific reason, even though I do not remember the exact day. It was one of my first gigs as a choir member at the Latvian National Opera, Riga. When I saw all the soloists sing on stage, I knew: I wanted it too! Then I had my first solo role - and from then on I could not get enough. It was like a drug! In particular, the relationship that you build on the stage with the audience was, and gives me a special energy boost. I give people my soul, and they give me theirs - a particularly nice form of give and take. The entire foundation of my ability I got here in Riga, and not at the Conservatory ...

... That you left without a degree. Why is that?

There simply was not enough time to sing. There were so many lessons in subjects that had nothing to do with singing. I thought then and think even now that it was just a waste of time. If we would only do what we can and love, then we would be in our professions much more professional. And above all happier.We do a lot, but because we're supposed to. This creates pressure, and pressure prevents us from developing our personality. So I put the tuition fees in private lessons - now it was only singing lessons.

Since we're on the subject of teaching: 2007 you were an international opera great, as you have decided in Amsterdam to once again take lessons with Margaret Honey ...

Margaret is an angel! I'm still her student - just last week I was with her. Not only is she a singing teacher, she's  a yoga singing teacher. It makes you free, fun-loving, and gives you the correct breathing. From time to time I just have to go to her. We singers are just not machines, and sometimes we need someone to give us energy. And she is such a person.

So you are still a student?

Oh, we stay students our whole lives, especially as a singer or actor - simply for the reason because we strive for perfection, but unfortunately are not perfect. We also have in our lives many teachers or mentors. For me that includes also conductors and singer colleagues. That includes Andrejs Zagars, the then director of the Latvian National Opera, to whom I owe an incredible amount.

What actually led you at the time to leave Riga?

I simply had too many invitations from other opera houses, which was eventually no longer tolerated by my ensemble-life. It was certainly not an easy decision, but I wanted to develop my career.

What was your first job outside of Riga?

I just started as a soloist when I got my first job at the Berlin State Opera. It was very lucky because I did not have to hoof it for years at the smaller opera houses, even if the step from Riga to Berlin was not exactly small. Incidentally, it was Tosca, I sang - a huge role at 26 years old! Not really clever, I know. Daniel Barenboim then came to me and said that I had indeed a great voice, but I should not sing this repertoire, because it was just too hard. At this point I began to think. In Latvia, I really  sang any role, no matter how hard it was. Of course this was also valuable experience.

Is there a special opera production you would call your international breakthrough?

There are a few roles that were such door openers. The most important was, I believe, Rusalka here at the Bavarian State Opera. After the performance, my manager said at the time: "Now I will not have to explain to anyone anymore who is Kristine Opolais." But the Manon Lescaut last year together with Jonas Kaufmann in Covent Garden, London, was a key experience. This was no longer the main role, but a title role! So much for Europe. As for America, my stand-in in La Bohème at the New York Metropolitan Opera was big break.

Everywhere you jump in so happily for other singers, most recently in Munich with Manon Lescaut - again with Jonas Kaufmann. Do you need the kick of spontaneity?

I have already been thinking about that. I have no idea why the good Lord always holds such surprises for me. If I'm honest: Once an opera house comes up to me with a request to step in quickly, I often think: No, not me. And then I say: Of course, you!  Better to answer quickly than to consider  twice. Well. I'm just a person who takes risks. And if the risk is successful, there's champagne!

If you are on stage - you are then highly concentrated or among the singers who are fully absorbed in their role?

Of course it is important to always be technically and vocally up to par, my roles are now not the easiest. On the other hand, opera is also theater. When I'm on stage, I'm not thinking a lot, I act almost instinctively. That's why I don't carry out on stage every minute stage direction, but do unexpected things - which is presumably not too weird for my colleagues. I just put myself into the characters as if what happens to them, happens to me.

If you then had to endure three hours of death and hell on stage with all of your tragic roles: How do you relax after that?

I can never really relax, this is one of the few negative aspects of my job. Add to that: Everyone knows what it means to have a baby. It costs incredibly high in energy, even if it is very nice to be a mother. Otherwise, in my spare time I'm shockingly normal. I like to go shopping, eat in good restaurants, give myself time outs in spa baths. But even there, I cannot relax completely. Singing is not just a profession - it is a complete way of life.