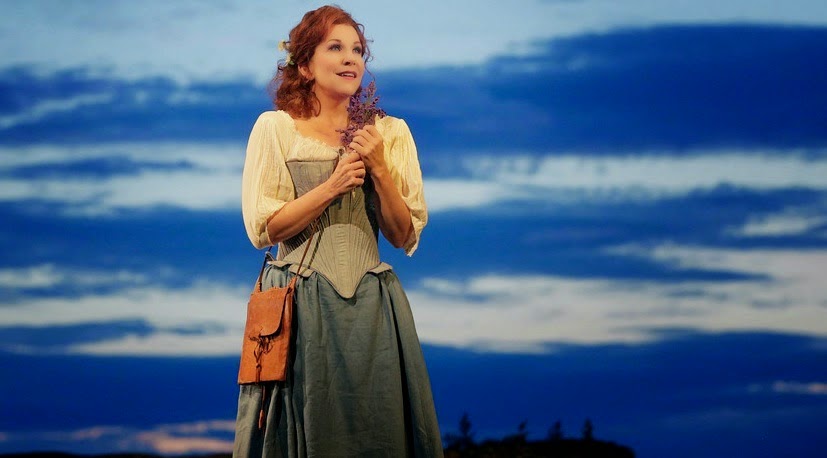 I am in Ohio, and we went together to a local movie theater to see Rossini's La Donna del Lago live from the Metropolitan Opera in New York.  The production is from the Santa Fe Opera, and I found it very pleasing that the sets in the first half reminded me so much of Santa Fe.  In Santa Fe you would be watching God's sunset at the back of the theater instead of this projected one.  Set changes slide quickly and easily out from the side, and the expected size of the stage is quite small.

Elena is a beautiful young woman who lives a simple life in the country.  She rows on the lake and lives in a small cottage nearby.  At the beginning a handsome young man sees her and rejoices at his good fortune.  He had heard of her before this, apparently, and this is his first sighting in real life.  So Elena is known far and wide to be very beautiful and still single.  Elena likes him and invites him to go home with her.

Elena has a rather complex life.  She already has a boyfriend, Malcolm, when this new admirer shows up.  On top of all that, her father has promised her to the warrior Rodrigo.  If he succeeds in overthrowing the evil James V, he gets Elena as his reward.  Elena does not like this.

Each of the singers performing these roles is the top in his field which made for some pretty spectacular singing,  John Osborn in particular comes on like gangbusters.  The hit tunes for this opera are "Tanti Affetti" and "Mura felice" sung by Malcom when he first enters.  Juan Diego is still king.

The highland clansmen prepare for war with the army of the king for a large part of the plot, then the clansmen lose, Rodrigo dies offstage, and we shift suddenly to the palace.  People complained about this scene.  Every scene in any production whatsoever is not going to be rich and elaborate.  Throughout most of the opera we are in the highlands of Scotland, in the beautiful countryside.  Then suddenly we are in a small space surrounded by black curtains with a red floor.  To me this was obvious:  now we are in the palace.  Palaces have red floors, Scottish highlands don't.  This is yet another instance of me not being confused by a stage set that everyone else is complaining about.  This isn't a movie.

Crosses burning is a more legitimate thing to complain about.  Why do that?  Additional research reveals that burning crosses were in the original poem The Lady of the Lake by Sir Walter Scott, 1810.  Rossini's opera appeared only 9 years later.

I liked very much the king reveal sequence in the last scene.  Gradually he turns into the king until finally she notices it too.  I had to remind my seatmates that at certain times in the history of opera only happy endings were allowed.  Elena gets her Malcom.  Joyce DiDonato finished the opera with best rendition of "Tanti affetti" I have heard.  It had true passion as well as spectacular coloratura.  There are a lot of versions of this on YT but none as truly beautiful as this.

The main story here is love and not war.  We skip rapidly through the battles so we can celebrate love whenever possible.  This is as it should be.  I enjoyed this opera very much, though it lies outside the mainstream.

in Vienna at the Theater an der Wien they were showing a Donna del Lago production not long ago, and the Malcolm was only spectre living in Elena´s mind, her alter ego, wearing female dress and in the end Elena married Giacomo.
really.
anonymous :)

This is part of the modern movement against cross-dressing in opera, a dismal trend indeed.