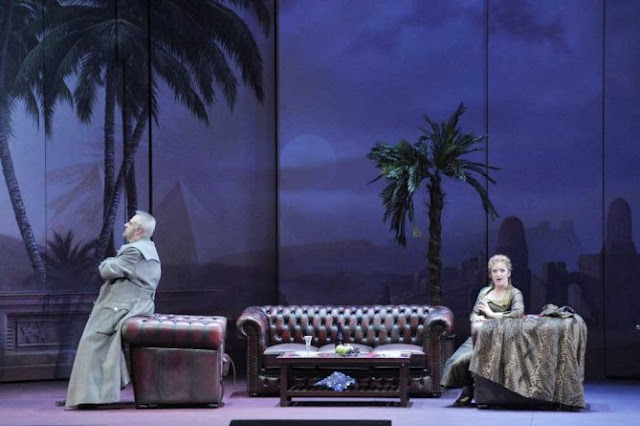 Friday night we saw Strauss's Die ägyptische Helena, me for the first time.

It is interesting to realize that all three Greek generals in the Trojan war have returning home operas.  One of the first operas, Monteverdi's Il ritorna de Ulisse in Patria concerns the return of Ulysses to Ithica after years of wandering around lost in the Mediterranean.  He sees his wife's suitors and just kills them all.  Short work.

Elektra is another after the Trojan war story.  Agamemnon returns home to his wife and apparently fails to notice her new lover.  Instead of Agamemnon killing the boy friend, the boy friend kills him.  Elektra, his daughter, doesn't respond well and obsesses over her revenge.

The last of our trilogy is King Menelaus, whose wife was kidnapped by Paris as a gift from Venus.  He is the cause of the Trojan war and brings his wife back with him from the war after ten years of fighting.  It is to argue whether Helen, the most beautiful woman in the world, is kidnapped or goes off on her own.  In this version King Menelaus seems to believe it was all her idea.  So this is one long jealous tantrum.

For some reason they are in Egypt.  Aithra, intensely obsessed with Helen of Troy, is a sorceress who apparently lives in an Egyptian brothel with a clam who knows everything.  The clam tells Aithra that Helen is in the sea near their island with her husband who is trying to kill her.  Aithra conjures a storm to distract Menelaus from killing his wife, then sends it away before it kills both of them.

Various tricks and potions are tried to trick Menelaus to take his wife back.  First they try forgetting which is temporarily successful.  The second act starts with the aria "Zweite Brautnacht,"[Second bridal night].

The plot gets vague at this point.  He gets angry, kills people, etc.  but finally they are resolved, and all ends happily.

I'm not sure this worked for me.  The final happiness was far too abrupt.  The orchestra was too loud.  I discussed this with other people, and they seemed to feel this was an acoustical problem.  The role of Menelaus is the only extended role for tenor I have heard from Strauss.  He sings constantly and very loudly.  Stefan Vinke was game.  This was a new opera for me so I have nothing to compare it to.