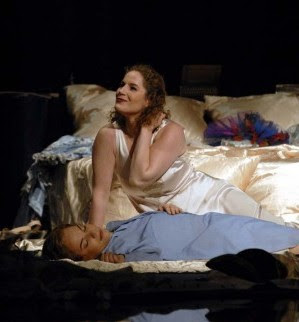 This performance of Der Rosenkavalier has to be ranked a success, even though the much anticipated Anja Harteros did not appear. I noticed that I was hallucinating her voice throughout the first act.  For the first time the orchestra was not too loud.

Daniela Sindram projected a very boyish Octavian in a pleasing style.  The falling in love was beautifully staged in very traditional looking costumes.  Everything else seemed contemporary with the opera (1912). The opera was not upstaged by its production as is often the case these days.  The third act was not over-staged, and so remained clear.

I love, among many things, when Ochs says after finding out that Octavian and Mariandel are the same person, "I will never stop feeling astounded.  Such finesse."  He is genuinely impressed. The trio was spectacular.  At the very end the Feldmarschallin watches from a distance.

Forgive me for not writing a long essay.
Posted by Dr.B at 4:21 AM