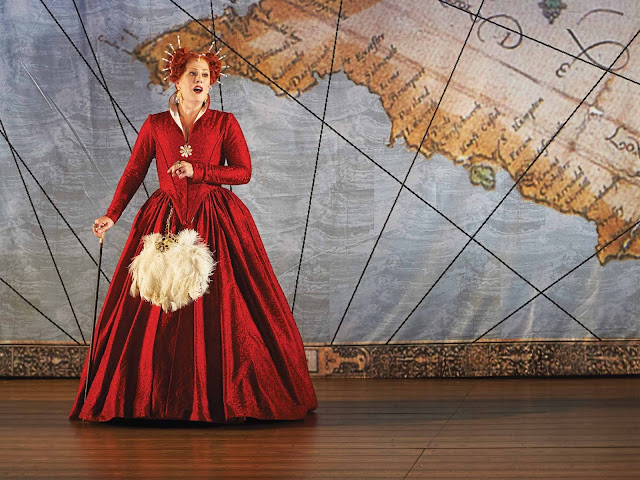 👍🏻
We were discussing the current queen of opera Sondra Radvanovsky, and I suggested we sing "God Save the Queen" when she came out for her bow, forgetting entirely that the opera starts with that same tune.  I am speaking of the current production of Donizetti's Roberto Devereux from the San Francisco Opera, a wonderful performance of a less than entirely wonderful opera.

This opera is questionable from a plot perspective.  The above listed characters are all members of the British upper class.  It is fairly easy to describe the relationship aspects of the story.

Elizabeth and Roberto have a secret relationship.  Since Nottingham knows nothing about it, we may assume that this is truly secret.  Then before leaving England to lead a war in Ireland, Robert starts a love relationship with Sara, a young woman in the court.  Robert goes off to war, and while he is away, Sara's father dies.  An upper class woman cannot be left free in the world, so Elizabeth arranges a marriage for her with the Duke of Nottingham.  No one is aware that she is in love with Essex.

Essex returns from war where he has been unsuccessful to find that Sara is married.  Meanwhile Elizabeth hopes that he still loves her.  An emotional mess ensues, the kind of emotional mess that can only happen in an Italian opera.  Long ago Elizabeth gave Robert a ring which he was to send to her if he was ever in danger.

Robert goes to see Sara.  So why isn't he locked up in the Tower of London?  She gives him a love token which her husband recognizes.

The part of the plot that makes no sense is the political part.  In real life Essex is supposed to have tried to overthrow the queen, which would make nonsense of her part in the emotional, operatic plot.  So the charges are trivial and relate to him being overly merciful toward the Irish.  So he is executed for no apparent reason.  The ring doesn't arrive in time. It's even more complicated than what I have described.

This is Queen Elizabeth's most vulnerable moment, and it happens in her old age.  She died in her 69th year.  It is mysteriously wonderful how Sondra Radvanovsky fits this role.  She is tall and regal, and has a large, commanding voice.  You believe that she is the absolute monarch who has fallen in love in her old age.  It is difficult to imagine any other soprano bringing this role to such spectacular heights.  She should sing it in your city, too.

The production which comes from Canada made the complex plot very clear, clearer than the recent Met production.  Sondra's supporting singers, primarily Russell Thomas, Jamie Barton and Andrew Manea, rose almost to her magnificence.  I don't think this is a great opera, though it is leading the path to Verdi, but it is a great opera for Sondra Radvanovsky.  Brava.

Opera Wire says that Sondra has cancelled her March performances of this opera at the Bayerische Staatsoper. So perhaps this was the last time. I am very glad I had the opportunity to see it live.