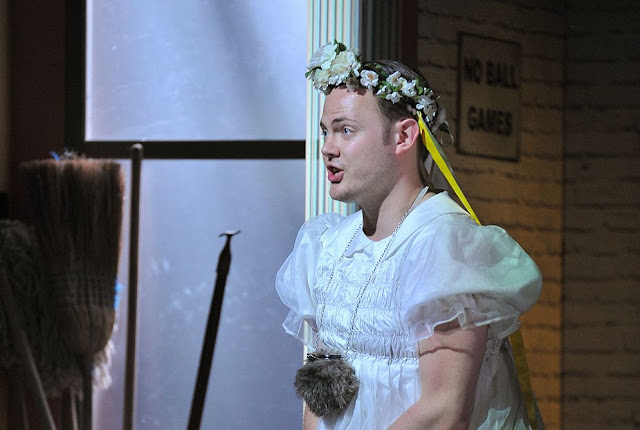 I have watched Benjamin Britten's Albert Herring presented by the Royal College of Music by way of Operavision.  This is Benjamin Britten's idea of comedy.  I think you have to be British.  It's very much an ensemble opera which makes it a good choice for a music school.

It is time to choose the Queen of May for the May Day celebration, and none of the current crop of young women are found suitable.  When widening the field of celebration, the council chooses Albert to be King of May because he just sells vegetables all day in his mother's shop.  As King he even wears a white dress as if he were a bride.  Albert's drink is spiked and he gets the hiccups.

A couple called Sid and Nancy enliven the scenes.  Are we amused that a young man is dressed up like a girl and declared to be saintly?  There's a lovely quartet toward the end when they all think he's dead.  The goings on in an English village seem mysterious to us I think.  They may have to abandon their dream of sinless youth.

I enjoyed the singing, but there are no arias.  Only Janis Kelly is a professional singer.

I always find it amusing that such a very English comedy is based on a short story by Guy de Maupassant which is in its turn quintessentially French.