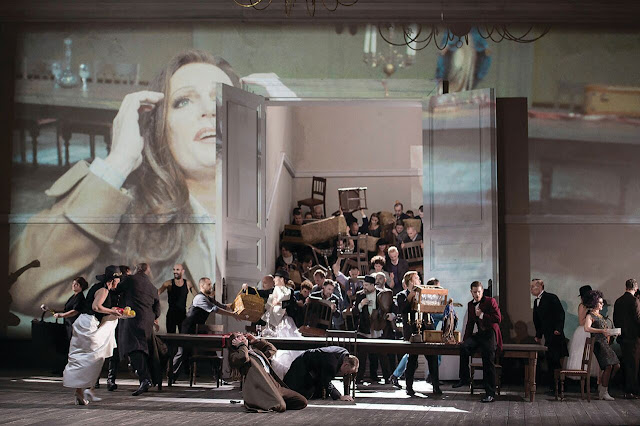 This production of La Forza del Destino from the Royal Opera in London emphasizes the already chaotic nature of this opera.  The plot is enhanced by staging the overture with scenes from the childhood of siblings Leonora and Don Carlo.  It is clear that Don Carlo hates his sister from long before her boyfriend shot their father.   A grown up Don Carlo is still playing with a red yo-yo from these scenes.  This is a visual clue so you will recognize Don Carlo as a grown up.

The opening scene of the shooting is by far the best staging I have seen of this difficult scene. Wonderful. You must believe that he intends no harm when he throws the gun to the floor. A further enhancement in the staging comes with projections of this death scene to show how it lives in Leonora's memory.

I love this chaotic opera, primarily for the music--it is some of the best Verdi--but would like very much to love it as theater as well.  It never quite works.  But here the opening is true to the plot and clearly outlined.  With our love of guns we still must ask ourselves, "What is he doing in her house with a gun in the first place?"

I'll admit I could do entirely without Preziosilla and her scenes.  Now that I realize "rataplan" came from Meyerbeer, I'm still not sure anything about the opera is improved by it.  Silliness in the deadly serious opera seems like nonsense.  It represents soldiers relaxing between killing people.  When Leonora sees her brother in this place, she knows she must go into hiding.

It's a terrible opera with glorious music and in this case spectacular singing.  Netrebko represents the
fear and horror that haunts Leonora with wonderful intensity.  Jonas is his usual spectacular self.  Tézier is a beautiful man who portrays Don Carlo's evil nature better than seems possible.  All this great music is wasted on useless vengeance.  I guess Rigoletto has a similar plot but hating your boss and hating your sister are rather different.  At least Rigoletto loves someone.