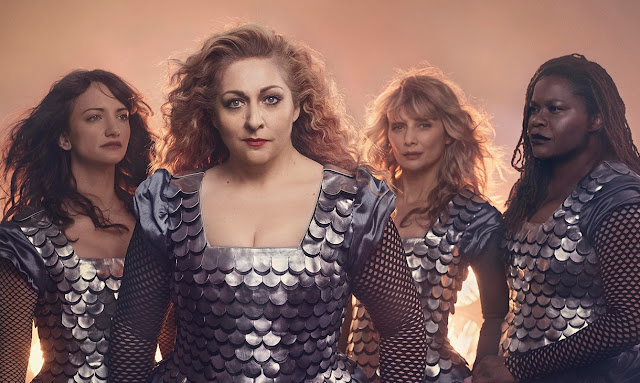 Opera is the greatest of all art forms because it centers on so many great female characters.  The opera is almost always about them.  Men tried to keep it all to themselves for as long as they could, but as soon as opera became commercial, that was over.

Wednesday I saw Wagner's Die Walküre delayed from last Saturday. I have seen this work many times, but this was very romantic for some reason.  I followed the story of Wotan better than ever.  In the previous opera, Das Rheingold, he is Fricka's husband, and they are happy but have no children.  He gains power by trading away the gold for Valhalla.  He is all powerful and uses his power to do whatever he wants.  By Walkure he is the father of everyone else in the story except Fricka and maybe Hunding.  He's been busy and Fricka is pissed.  All of the 9 Valkyries are his daughters by Erda.  Siegmund and Sieglinde are his children by a she wolf.

They did act bows to avoid making people stay in costume all the way to the end.  Act I is Siegmund, Sieglinde and Hunding.  The twins have not seen one another since the day their house burned down, killing their mother.  Siegmund has wandered alone while Sieglinde was forced to marry Hunding.  The singing in this act was beautiful.. Eva-Maria created the role in the original mounting of this production.  Her partner at that time was Jonas Kaufmann.  They truly looked like brother and sister.  Stuart sang well this time, but Eva has grown in the role.  She was wonderful, with great dramatic presence.

The staging was slightly different.  The planks at the front of the stage didn't stick up in front of the singers this time which looked much better.  When he sings, "du bist der Lenz" I want something spectacular to happen.  I want to feel that in that moment spring has arrived.

In Act II Wotan, Fricka and Brünnhilde arrive.  Christine is very saucy at this point.  Her Brünnhilde has truly spectacular emotional range.  She shows us joy, love, pride, sympathy, sorrow.  It is the greatness of this performance that makes this production of Die Walküre the best that I have seen.  Wotan asks to see the joy again, and she justly refuses.

I have seen Jamie Barton's Fricka before and loved it again here.  I have also seen Greer Grimsley's Wotan before and found him very much improved.

Act III starts with Valkyries waving.  A bit too silly for me.  However, the act ended well.

Philippe Jordan brought us the emotional range that appeared in the interpretations of all the actors.  I truly loved this.  The Met seems to have realized that Christine Goerke would be something we would all want to see.  Thank you.
Posted by Dr.B at 1:09 PM