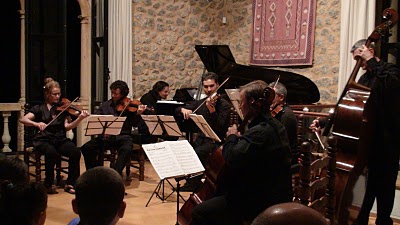 Camerata Deia is an ensemble of varying composition that came to Sacramento last night from their home base in Spain to conclude this season's Millennium Concert Series.  Two of our pieces included piano, so I have included a picture that shows one.  They played.

Joaquin Turina's Piano Quartet in A minor Op.67 (1931) in three movements.  The program seems to be full of mistakes.  This one says Turina's dates are 1833-1897 while Wikipedia says 1882-1949.  Based on the sound of the music, I am inclined to go with the latter.  There are hints of modernism but nothing too extreme.

Enrique Granados's Piano Quintet in G minor, Op.49 (1894) in three movements.  The program identified a fourth movement which did not exist.  I liked this piece.

Mendelssohn's Octet in E-flat Major, Op. 20 (1825) in four movements.  This is for two string quartets together.  The third movement was interestingly named Scherzo:  Allegro leggierissimo.[the most amount of leggiero].  You remember a leggiero tenor?  This would sort of translate to the most amount of not legato.  There was a lot of bow bouncing.  A 16 year old might get off on this.  It's a fun piece.