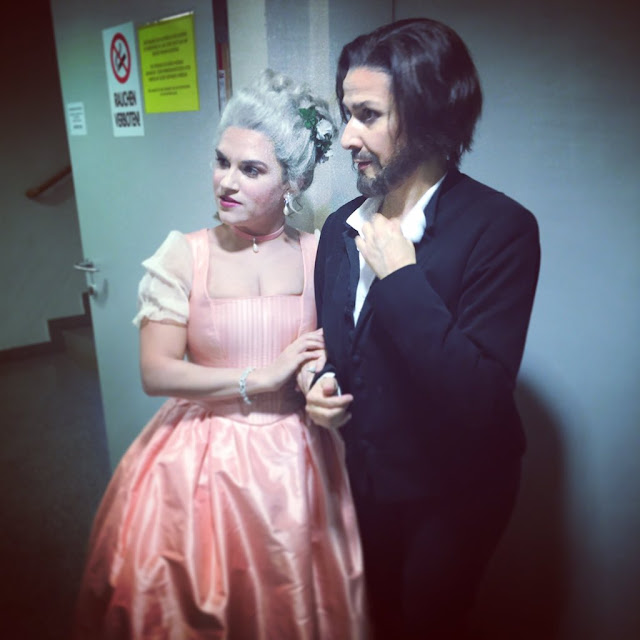 This is the Salzburg production of Handel's Ariodante, 2017, starring the one and only Cecilia Bartoli.  In Kathryn Lewek they have found an excellent soprano who is smaller than Cecilia to play her love.  Their voices are beautiful together.  The presence of many men in business suits makes it regie.  At the very beginning Cecilia speaks to us in Italian to explain her story.  The set is large and almost blank.

Cecilia's entrance is made in a full suit of armor.  One cannot stop staring at her.  In her first aria after the king has declared Ariodante to be his heir, she sings all that coloratura while getting increasingly drunk.  I didn't know this opera was a comedy.  Villazon prevents her from falling down.  On the eve of the wedding there is a party where people dance in period costumes, including Ariodante and Ginevra. The bits where Cecilia dances are relatively short but enjoyable.  So far so good.

The plot is one of those she loves him, while he loves someone else, etc.  Polinesso is the villain.  He plots to steal Ginevra.  Dalinda loves Polinesso, and Lurcanio loves Dalinda.  Polinesso bribes Dalinda to disguise herself as Ginevra to fool Ariodante.  He succeeds with this ruse and drops one of Ginevra's dresses on the floor outside her room.  Ariodante sings "scherza infida" and puts the dress on.

The efforts to bring the story to life seem very successful to me.  Ginevra laments the loss of Ariodante, but when he returns, he's wearing his beard and the dress Polinesso gave him, and Ginevra freaks out.  Suddenly she's interested in all the other men around her.  Hmmm.  The aria by Ginevra that appears here is accompanied by a lot of physical violence which looks too real to me.

This entire opera is performed with great emotional intensity.  If you've followed the news about this, you know that Ariodante eventually turns into Cecilia Bartoli.  So then she's singing and smoking a cigar at the same time.  It doesn't look lit, but....  When I was married long ago, my husband smoked a pipe, and I swear he would blow smoke rings exactly like that.  I swear.  This indicates a level of expertise.

It has a peculiar but happy ending.  It is nice to see Rolando, and Kathryn Lewek was marvelous.  Hail La Bartoli.  I did kind of like the beard.

The production is about gender ambiguity.  At the beginning our hero doesn't seem very happy while at the end he/she is full of smiles.   For more pictures see here.

Everyone was quite well behaved about their clapping.