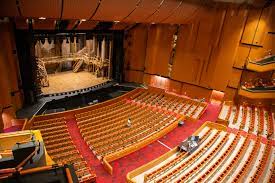 The Sacramento Philharmonic and Opera gave their first performance of this season in the recently refurbished  SAFE Credit Union Performing Arts Center.  The program consisted of:

Beethoven "The Consecration of the House" Overture, Op. 124

Jeffrey Kahane both conducted and played the piano in the Mozart.  This is something going on now.  Instead of hiring both a conductor and a pianist, one hires someone who can do both at the same time, thus getting two for the price of one.  This is, of course, what would have happened in Mozart's day.  The concert was good but not very exciting.

The picture above is the only one I could find that shows the new configuration of the seats in the reconstructed center.  Previously the seats extended all the way across with aisles only at the ends. Now we have a more conventional configuration.  There is an orchestra pit, but it was covered for our performance.

They told us the sound was amplified.  It had a kind of flat sound which diminished the expected and desired dynamic range.  Classical music is not normally amplified, and if you are amplifying it, it is considered a sign that you have failed in any kind acoustic design. People came down from the balcony and said they could hear nothing up there.  We'll see.