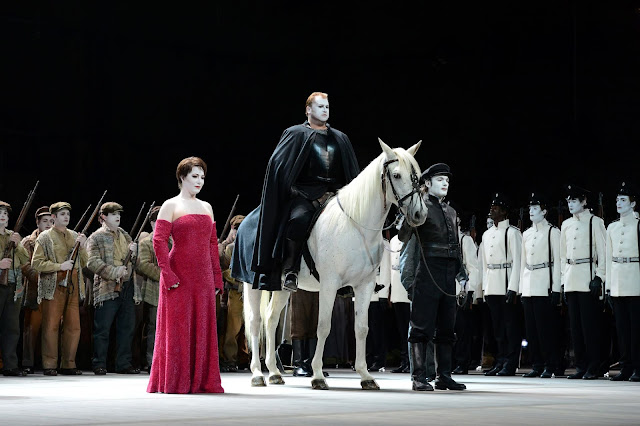 Wagner's Rienzi, der letzte der Tribunen, 1842, in a performance from Toulouse in 2013 is offered by medici.tv.  This infrequently performed opera has a dense back story.  Wagner was living in France at the time of composition and was strongly influenced by Grand Opera and Meyerbeer.  In fact it was Meyerbeer who rescued Wagner from debtor's prison and introduced him to someone in Dresden who produced the opera.  Everything in Grand Opera seems to be about politics, in this case medieval Roman politics where the opera is set.  What makes something a Grand Opera?  Heavy pomposity.  Ballet.  Historical subjects.  In Meyerbeer it seems to include coloratura arias but not here.

Another part of the back story for Rienzi is that it is supposed to have been a powerful influence on Hitler.  I think it was perhaps Rienzi the orator that attracted him.  He missed the part where everything ends in disaster.

The plot concerns freeing the Roman people.  Politics in the nineteenth century was chaotic and violent.  The nations Germany and Italy were formed during this time, and France restructured a few times.  It would make an interesting project to study the relationship between opera and contemporary politics.

Wagner seems to have wised up after this.  He remains extremely popular because operas about Minnesingers and Meistersingers (Tannhäuser and Die Meistersinger), Arthurian knights (Lohengrin and Parsifal), and mythical figures (Tristan und Isolde, Der fliegende Holländer and The Ring) don't arouse modern cultural animosity.  We want to blame him for Hitler, but concrete evidence doesn't seem to be there.

I digress.  The opera begins with films of rioting from various times and cultures.  It's intensely violent, but cuts away to the orchestra occasionally to ease the tension.

The Orsinis, who resemble the gangsters in West Side Story, are harassing Rienzi's sister.  A young man, Adriano, and the Colonni step in to rescue her.  There is some rioting followed by the entrance of Rienzi who brings peace.  He makes a speech to the crowd.  There is great singing and fabulous choral sections here.  Nothing gruesome happens.

Rienzi declares peace in a grand oration, but the overthrown nobles are understandably angry.  One of them tries to assassinate Rienzi, but he is wearing armor under his clothing.  They are led off by guards.  Adriano and Irène plead for mercy for his father, and Rienzi grants it.  This is quite thrilling, mainly because the singing is so fabulous.  The role of Rienzi is huge and very well sung.  A half-hour ballet goes here, but they have skipped it.

Act III features the real star of this show:  Adriano, the character who messes everything up, was written for Wilhelmine Schröder-Devrient.  Schröder-Devrient is known for singing Fidelio and making it famous.

Rienzi's army kills both Orsini and Colonna, and Adriano swears revenge.  Rienzi offends the Pope, and that appears to be it.  Everything goes down in flames.  This is very well done, but the musical style is repetitive and endlessly bombastic.  I may not be particularly wild about this opera, but the tenor who sings Rienzi is amazing.  "Allmächt'ger Vater, blick herab!“the hit tune of this opera, comes in Act IV.  Recommended.

Skip to about 3 1/2 minutes in. Unless you want to hear the prelude.