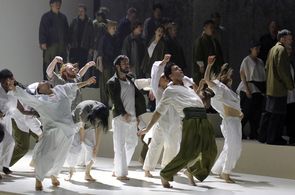 This version of Gluck's Alceste comes live from the Bayerische Staatsoper.  I understand it to be a regie production, so we'll see.  This is the French version.

Well, this isn't regietheater to me.  It's more like a Rameau opera ballet.  I think the costumes are intended to look at least semi-Greek.  There is constant dancing in a style with a lot of arm waving, apparently so the singers can participate.  Alceste and the priest of Apollo are the main characters.  The king is ill, and Alceste volunteers to die instead of him.  This is an excellent role for Dorothea Röschmann.  At the end of the act she sings the hit tune for this opera:  "Divinites du Styx."  It might be a bit heavy for her.

Children are picking up what appear to be plates of food and handing them into the prompter's box.  This will give you a flavor of the dancing.

At last the King makes his first entrance not looking at all ill. Husband and wife are happy to see each other.  Neither one is dead.  Then he finds out Alceste will die and wishes it was him.

Admète follows Alceste to hell.  They sing together without benefit of ballet.  People on stilts appear.  A man dressed all in white appears, and I assume he is Apollo.  He blesses everyone, grants immortality to Hercules, etc.  The family is united, including the children.  This part is the most like regie, but I think the original is also confusing.  The dancers are back.  And that's the end.

This was mysterious.  They tried very hard to make it interesting, but it won't make my favorites list.