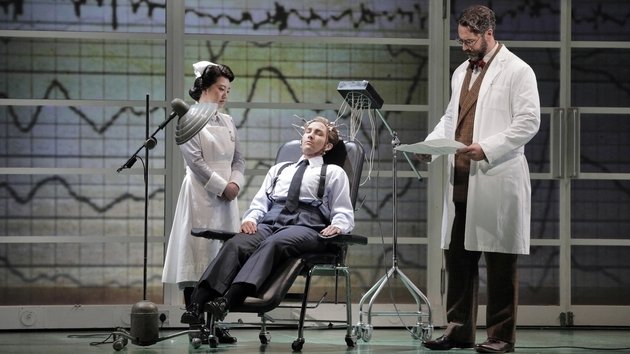 Our production of Orlando, an opera in three acts by George Frideric Handel seen at the San Francisco Opera, has leapt into the latest craze in opera regietheater:  opera as psychotherapy.  We have seen this recently in:
So our hero is showing signs of mental illness after fighting for Britain at the beginning of WWII .  In an early scene photographs of Edward VIII before and after his abdication are shown, including one where he and Wallace are friendly with Hitler.  This sets the context.  Hitler is probably still easy to identify, but I might wonder about Edward VIII.

Orlando is having hallucinations which are projected on the set as seen above.  We see handwriting, a large engagement ring, lights, a woman's eyes, etc.

Orlando is in a hospital bed.  He is shown rescuing a woman in a wheelchair.  Both Dorinda and Angelica fall in love with Medoro, who has injured his leg.  Orlando has given Angelica an engagement ring.  Characters are introduced in rooms of the hospital.

Dorinda lets Angelica have Medoro, and Angelica gives Dorinda Orlando's ring.  Orlando is furious over this turn events and threatens everyone.  At the end of the act we hear bombs exploding

Orlando is completely bonkers by this time and is locked up.  Spoiler alert:  he is treated with not too shocking shock treatments, and is cured.  Angelica and Medoro are allowed to go in peace.  Orlando puts his uniform back on and retreats. 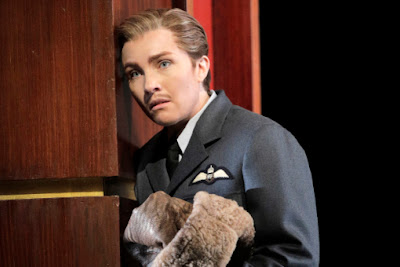 I felt that this modernization was very successful.  It fit the story surprisingly well.  However, sometimes plot points went by in a way that allowed you to completely miss them.

In Handel's time Orlando was a male castrato and Medoro was a woman.  We have the long ago example of Marilyn Horne to reverse this.  Our countertenor Aryeh Nussbaum Cohen is nice looking and has a beautiful voice.  My favorite singing was by Christian Van Horn, a bass who sings coloratura.  Who ever heard of such a thing.

Among the women Christina Gansch received the most applause for her act III aria.  She is someone to look out for.  Our stalwarts Sasha Cooke and Heidi Stober were both excellent actresses and good in their roles.  Their voices didn't always precisely fit the music they were singing.  Orlando in particular is quite low.

One becomes impatient with endless da capo arias, but all in all it was very enjoyable.  The orchestra included recorders, a small organ but no harpsichord, and a theorbo.

The screens in the balcony are coming down.  This is sad.  I can't read the titles from where I sit without using binoculars, while the ones on the screens are very clear.  This has to do with money.  I'm not happy about it.