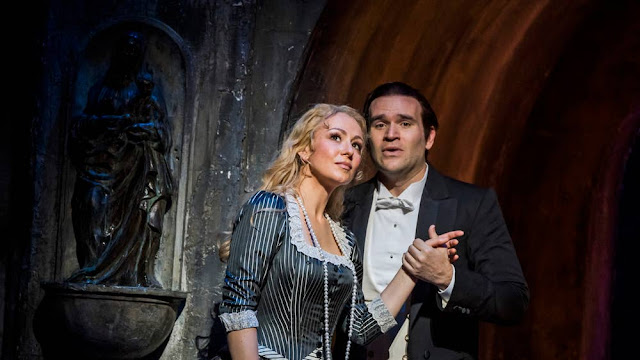 Gounod's Faust came to a theater near me from the Royal Opera in London where it was live on April 30.  Faust is a kind of morality myth of no specific era, so it cannot be considered regie that it is staged for the period of it's original appearance in 1859.  The settings bring the story to life.  I always remember that the Germans call this opera Marguerite.  For at least its first 50 years this opera was wildly popular, but musical tastes have moved on, and it's heard now as a bit corny, I think.

Erwin Schrott played Méphistophélès for laughs, something he's very good at.  I loved Michael's voice in his aria "Salut, demeure chaste et pure."   I enjoy his style as a romantic hero very much. Irina Lungu was a replacement for Diana Damrau who I understand has a slipped disc.  I liked her.

This is as close to a traditional production as you are likely to see these days. 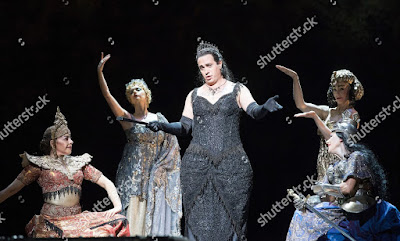 The ending is perfection.  Marguerite rejects both Faust and the Devil, prays to God, and an angel appears to declare her saved.  Faust is again an old man.  The Devil laughs.

It worked for me much better than the Met version.
Posted by Dr.B at 7:32 PM