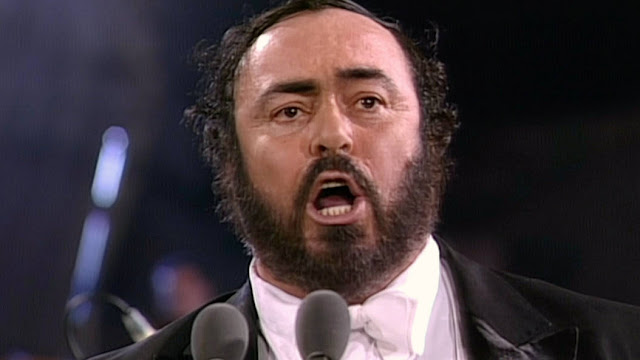 Last night there was a Fathom Event that featured Ron Howard's new movie about Luciano Pavarotti.  This was irresistible, so I went.  I arrived early and got to read through interesting events in Pavarotti's life.

For me the most fun was trying to identify people in the photographs who were not identified with captions or remarks.  The only thing said about Mirella Freni was that she and Luciano had shared a wet nurse as babies.  However, her picture appeared several times.  I only remember Joan Sutherland mentioned for her contribution to his career.  She taught him how to breathe.  He mentioned that he felt her diaphragm working.  This is a normal part of vocal training. I was also amused by brief remarks by Vittorio Grigolo describing how a tenor sound is an artificial, deliberately created sound.  Any tenor needs to train with someone who understands this.

Early parts of the movie concerned themselves with the early parts of Luciano's operatic career.  The San Francisco Opera is never mentioned, though he sang there many times and learned many new roles with the professional coaches there.  After the Three Tenors concert in Rome in 1990, which I now recognize to have taken place in the Baths of Caracalla, he came to us no more.

There are quite a lot of interviews with his family, though the precise meaning of these only develops gradually.  It is handled carefully.  Luciano was very friendly and outgoing, made friends easily, including Princess Diana.

Then it moves into discussing his career as Pavarotti and Friends, something that does not particularly interest me.  He made lots of money.  My main complaint is there is a lot of talking and a lot less singing.

The movie ended with his spectacular performance in the Three Tenors Concert of Puccini's "Nessum dorma."  The best singing in the film.  Your curiosity will be fully satisfied, and there are lots of other sources for Luciano singing.

I find myself agreeing with you on all the points you made. Ron Howard clearly made this film for a non-opera audience. Nowhere near enough complete arias (maybe 3-4 in the entire movie), and I thought some of the choices for instrumental interludes (used for scene transitions) was weird. The Count's aria from "Nozze" at the very start of the film? The duet from "Lakme"? It's almost as if the director said, "I need a 30-second music clip right HERE, and I don't care what it is as long as it's opera." Also, don't you think someone should have taught Ron Howard how to properly pronounce "Luciano Pavarotti" during his introductory remarks? Interesting, as well, how there was no mention of his later proclivities for cancelling performances at short notice.

We had about 40 people in a suburban theater that held about 65-70 seats, so not too bad a crowd for mid-week. I didn't stick around for too many of the credits and wonder if they included a list of what he sang. I'm especially curious to know the name of that piece that played over his funeral procession -- not operatic, perhaps something religious?