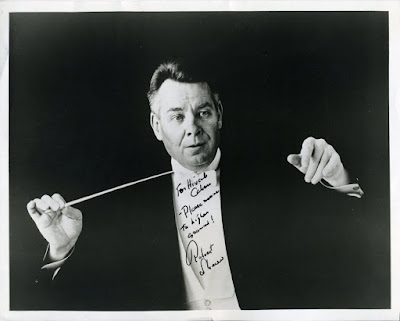 In my lifetime the great choral conductor Robert Shaw was a giant among men.  I just finished watching a PBS film about his life.  There was a lot of biographical material that I knew nothing about, might possibly have preferred not to know anything about.  Too late.  It was still moving and satisfying to hear it all.

I liked it that he insisted on integration no matter what the consequences.  Bravo.

My own life interfaced with his on occasion.  As a student at Indiana University, I sang with him in a performance of Beethoven's Ninth Symphony.

Later as a member of the San Francisco Symphony Chorus we performed the Brahms Requiem, a work which he recorded twice.  Ours was better than either one of these.  We had Kathleen Battle for the soprano soloist.

Details would require research.  The Indiana University performance was coached from beginning to end by Shaw who seemed to have secrets.  One secret was that a chorus should follow the same concepts as a symphony.  Every alto must sing precisely the same pitches in precisely the same rhythm.  This seems obvious.  He never talked about vibrato but did all kinds of pitch exercises.  It makes a huge difference.

He was my idol before I actually worked with him.