Revival of The King and I 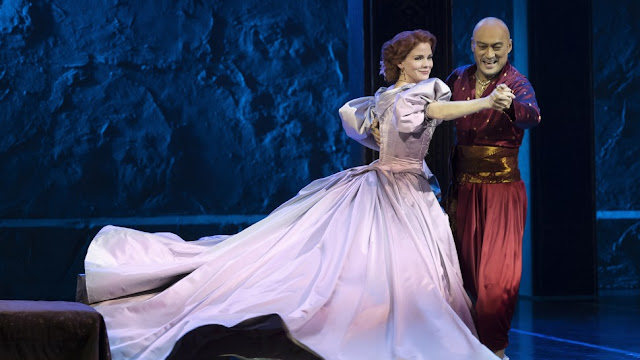 From the perspective of 2019 Rodgers and Hammerstein's The King and I seems very different.  Is this cultural appropriation?  We have cute oriental children, a king that goes barefoot, bowing while curling up on the floor, etc. etc. and so forth.  Who knows what the true reality is? The English conquered the world and never reconsidered their own values.

The musical is based on the memoirs of Anna Harriette Leonowens which were published after the American civil war, while Uncle Ton's Cabin was still well known.  This novel is a topic in Anna's lessons with the children.  They notice that this contradicts what their father has taught.

Anna does not come as a conqueror.  She is hired to teach the children and receives a salary.  She teaches English ideas.  But that is why the king has hired her.  He wants to find a place in this world filled with European conquerors.  He wants to appear to them to be civilized, perhaps realizing that they are filled with cultural prejudices.  It's best to just go with it.

Kelli O'Hara projects the classy but not too classy tone of Anna.  She sings sweetly and does a nice waltz [oops--polka].  I wasn't too sure about Ken Watanabe at first, but he won me over.  Tuptim's lover was a beautiful young man who was not that great as a singer.  Ken sang the king's songs resulting in melodies I don't think I've ever really heard before.