Mozart at the Sacramento Philharmonic and Opera 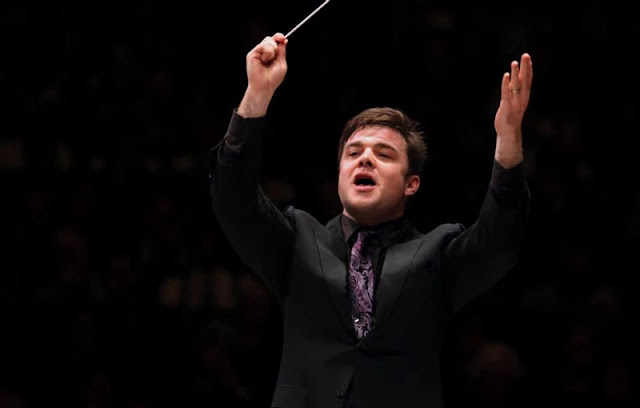 Our conductor for this all Mozart program was Michael Christie.  In our all Mozart program at the
Sacramento Philharmonic and Opera I didn't notice that he used a baton.  He has won a Grammy.  This concert took place in Fremont Presbyterian and was split into two concerts.

The program began with Mozart's Symphony No. 41 "Jupiter."  The program did not list the movements, as I believe is still traditional.  I admit that Mozart's symphonies are more standardized than other composers, but I still like seeing the movements.  This was good but not thrilling.  Mr. Christie's tempos are a bit fast IMHO.

We were treated to semi-staged opera scenes from Mozart's Cosi fan tutte and Le nozze di Figaro.   These were remarkably well coordinated since neither the conductor nor the singers could see one another.  The following cast listings are made up by me, since nothing in the program lists these.

The singers all wore standard concert attire except Doctor Despina.

Act I Finale to Cosi fan tutte begins when the two lovers in their disguises pretend to take poison.  Robitussin is Doctor Despina's cure.  The supertitles were loosely translated for laughs.

Act II Finale to Le nozze di Figaro begins just before Susanna steps out of the Countess's wardrobe instead of the expected Cherubino.  This is an excellent place to begin since you cannot have a Cherubino without a costume of some kind.

These are two of Mozart's magnificent ensemble scenes in opera.  He comes in an era when most opera consisted of a series of arias with perhaps a duet here or there.  Amazing ensembles are a treat, and these were beautifully sung with a real sense of ensemble.  The two sisters in Cosi were especially beautiful together.