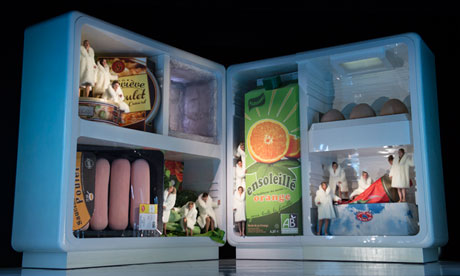 Jean-Philippe Rameau's opera Hippolyte et Aricie (1733) is basically the same plot as Phèdre by Jean Racine (1677), a play that was done at my college when I was an undergraduate. This is only my second experience of a Rameau opera--the first was Platée at Santa Fe, a comedy.

"It has an extraordinary quality of meandering."  Phaedre, wife of Theseus, falls in love with her step son Hippolytus who wishes to marry Aricia.  This is a serious opera, filled with gods and mortals.  Cupid and Diana vie for the souls of men, and Jove grants that one day a year Cupid will reign.  Racine is dark and very tragic, but we are now in the high Baroque which demands its happy ending.

In this production the mortals are modern and the gods are Baroque.  In the beginning Diana's servants live inside a refrigerator and proceed to prepare broccoli and cauliflower.  Cupid pops out of one of the eggs.  Theseus and Phaedre live in an ordinary small apartment with a fishless fish tank.  Perhaps that's their fish poking their heads out of the radiator below.

Hell is the most fun.  Pluto whose realm is pictured as a giant radiator is served by a variety of insects, include two spiders who perform a charming duet.  We aren't sure what Theseus is doing in hell, but the change of scene is welcome.

After Phaedre kills herself, the young lovers are reunited to happy rejoicing.

Though they are contemporaries, you will not hear the wondrous variety of Handel here.  If the tempo starts to pick up a bit, it must be a ballet.  There are, of course, no castrati in French opera and little of the intense display of coloratura that is present in Italian opera.  Perhaps we might even call this the Rococo.  It is graceful, elegant and formal above all else.  Rameau is pleasant but not particularly exciting.

This opera came to me via a live stream from Glyndebourne.  If it is considered a success, the opera and its production may start showing up other places. Between the scenes is the head of an old bald guy staring out at us.  If they make a DVD, they could think about leaving him out.

You may be curious to know that the version on YouTube with Emmanuelle Haim is traditional in its staging.  Diana descends from above just as she should.  The subtitles are in French.
Posted by Dr.B at 12:26 PM

If you have a few moments I would like to share a note and question on Rameau’s “Hippolyte et Aricie”.

Here are several comments which appeared after the Glyndebourne Festival performance in July 2013.


1. Musically, “Hippolyte et Aricie” falls curiously flat. In vain one waits for any of the voices to break free from the conversational monotony and understated politeness of the score. With very few exceptions, the work saunters on in a well-behaved manner which is undoubtedly elegant, but hardly touching. Not even Phaedra’s agonised soul-searching in Act 4, quite redeems what is, in essence, a very boring work.


2. Rameau's score darts between court formality — measured out in the mincing steps of the minuet — and interiority, and is still a bit of a shock to Handel-accustomed ears. Musical expectations are thwarted, resolutions delayed, until we are driven mad with frustration. I believe this work will remain side-repertory mainly for absolute opera experts.


3. This opera is based in a very strict aristocratic tradition that makes very little sense to us today. The result is opera that is less emotionally engaging. I once had a directing student in Brazil who staged quite a nice “Hippolyte et Aricie” but the Latin audience found it emotionally cold and too cerebral.


4. It has taken Rameau’s five act opera “Hippolyte et Aricie” a mere 280 years to travel from Paris to its first production at Glyndebourne: was it worth the wait? I found myself underwhelmed at the end of an evening that consisted of so much effort. I foresee a revival in four or five years time, and then a quiet withdrawal from the schedule — perhaps for another very, very long period. I am delighted to have seen this “Hippolyte” but I won’t be rushing to see it again.


5. In his first opera Rameau created a more sophisticated musical edifice and it has not really caught on with the wider public. Much of the piece seems somehow too precious for consumption outside its native land. Without prejudice, I will pass over it lightly.


1) Several people have told me that they find something more human, spiritual and accessible in Handel's operas and that Rameau’s “Hippolyte” will always be for 'special tastes'.... Do you agree with this?

2) Does it surprise you that this opera has not attracted a larger contingent of passionate admirers?

A Rameau opera has never made it into the top 100. In fact French opera required Grand Opera to make a huge hit anywhere. Handel is popular for his spectacular vocal writing which Rameau does not approach. Since the French didn't use castrati, they had no singers who lived solely to show off. We miss that. I rather like the sound of Rameau, but it's possible you have to be pre-revolutionary French to love it as theater.

I have seen about four different operas by Rameau, and I think I preferred the comedy Platée. I kind of liked Les Indes galante, which is an opéra-ballet. Only Le temple de la Gloire, also an opera-ballet, was done in anything like a period production.