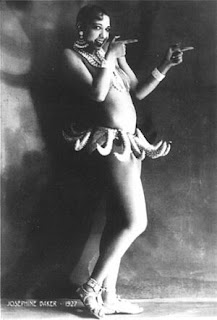 It is astounding to think how little changed in France between the 1745 of Rameau's Comédies lyriques Platée, the Swamp Queen, and the banana dance of Josephine Baker. The mind boggles. The taste for absurdity and low comedy is exactly the same.

The work is more a ballet than an opera. At its premiere it was called a ballet bouffon. In the San Francisco Bay Area it was presented by the Mark Morris dance company. Folly, a coloratura soprano here sung by Heidi Stober, presents some spectacular singing, but hers is the only truly operatic role.

The set begins looking like a section of portable bleachers borrowed from the neighborhood high school and gradually disintegrates into the swamp.

The chorus enters in couples led by suspiciously thin ushers and is seated in the bleachers in a way that mirrors the audience it is facing. Then the ushers go berserk and start forcing everyone to change seats, sometimes crawling on the floor, sometimes climbing over the rows.

The plot is an attempt to reconcile Jupiter and Juno by making it seem that Jupiter is marrying a hideous monster. To avoid offending women by presenting an ugly woman as a character, the role of Platée is composed for a tenor and always played by a man. At the Santa Fe Opera the role is sung by Jean-Paul Fouchécourt, the current master of this role wherever it is presented. He is what I would incorrectly call a Spieltenor. (I would call him that because I am ignorant of French opera and don't know what they call anything. This blog is subtitled the education of DrB.) He was very funny and quite unselfconscious. The jokes came thick and fast, and the ballet numbers were very creative. Gods descended from the ceiling. Scum gradually grew until it covered everything. When she was rejected by Jupiter and ridiculed by everyone, Platée vowed to get her revenge.

And the music? Varied and amusing in a late Baroque, early Rococo way, very suitable for dancing.


See pictures of Santa Fe Opera's Platée here. It's almost like being there.
Posted by Dr.B at 9:35 AM