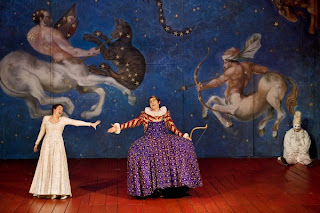 They were cheap, so I bought a lot of DVDs from House of Opera, including Francesco Cavalli's La Calisto, a work from 1651 Venice. This is the version from Unter den Linden in Berlin, 2002, and is taped from Belgian television. This production is also mentioned in Eyewitness Companions: Opera .

These people are up to no good. I have a very deep feeling that this production will tell you more about Venetian opera than anything I could possibly write, or anything you will read in textbooks. Gods and goddesses come and go on bizarre stage machinery. Many claims of chastity are proclaimed, but none are actually maintained. Giove starts out as a baritone, and then makes a fabulous change over to falsetto in his disguise as Diana. There is wonderful coloratura throughout and a complete utter lack of pomposity.

I thought about listing off the cast, but they are no one you know. If you buy the DVD, it will list them at the beginning. The picture is good and the sound is adequate.