Opera news is starting to read like the tabloids.

Luciano Pavarotti is first reported to be much thinner and on death's door. Then his wife says he only wishes he were much thinner, is responding well to cancer treatment and will be back to work soon.

Measha Brueggergosman, the barefoot soprano, is now sporting a nose ring, though no picture is provided.

Anna Netrebko has a new secret boy friend. She said this in an interview here.

Jerry Hadley has shot himself in the head and is considered gone. This is a very sad business. 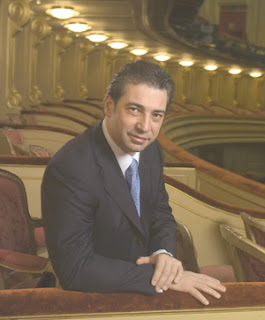 Nicola Luisotti, the guy who is slated to replace Donald Runnicles at the San Francisco Opera, is the same guy who conducted the duets album with Anna and Rolando. Oh, pardon me, that's real news. L'Italo Americano, the Italian-American newspaper, is excited about this. He looks to be pretty cute. 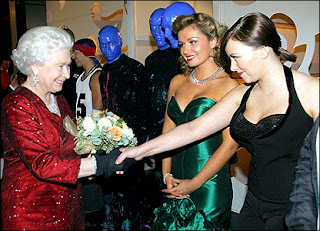 And this picture of the Queen--doesn't she look adorable? I'm pretty sure Katherine Jenkins is the one in the center and Charlotte Church is on the right. And not the reverse as reported elsewhere on the internet. In the back are blue men. The British musical scene is pretty puzzling from our view across the pond.
Posted by Dr.B at 11:04 PM