It is impossible to explain a Cecilia Bartoli performance. I systems analyze everything so why not this? All I can say is the whole is greater than the sum of the parts. 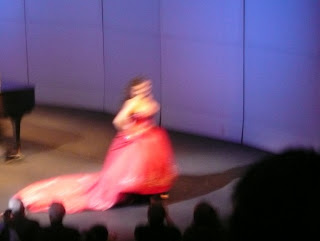 I have all of Cecilia's recordings and have listened to them all many times. For years I longed for them like food. And I think it was often these very songs I longed for and not the more impressive and popular coloratura. It was a pleasure to hear them again Sunday on the Cal Performances series in Zellerbach Hall in Berkeley.

The repertoire is in three languages: Italian, French and Spanish. Cecilia is fabulous in all three, but I find her Spanish especially sexy. "Havanaise" by Pauline Viardot-Garcia is one of the songs in Spanish.

There was a little bit of comic business associated with this song. They went for a short break and someone opened a door backstage, and a gust of wind blew some of the music onto the floor. The pianist, Sergio Ciomei, picked up the music from the floor and put it back on the piano but didn't really look to see what he was doing. Then for some reason he tossed some pages back onto the floor. Then in the middle of "Havanaise" he noticed that one of the pages of the piece he was currently playing was missing, retrieved it from the floor and went right on playing without missing a beat. This was very impressive and everyone clapped, including Cecilia. 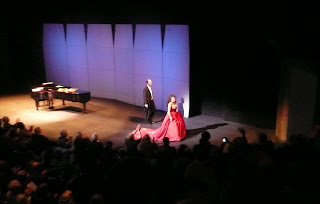 I was discussing record sales by classical singers with my friend D, and we discussed crossover, something Cecilia has never done. She is second only to Callas for sales by a female classical singer.

I told him about my idea that she should do a Flamenco album, and at first he hated the idea. Toward the end of the program he changed his mind.

Another piece of comic business that was obviously planned came during the performance of "Rataplan," a piece that normally comes with a drum accompaniment. Ciomei put a piece of paper on the strings of the piano (prepared piano?), making it sound a little like a very quiet drum. Cute, I thought, but other people I talked to couldn't figure out what was going on.

People in Berkeley love Cecilia, and she responds with an outpouring of warmth and openness that exceeds what I have seen in other venues. It is truly a love feast.

La Sonnambula CDs were on sale in the lobby along with DVDs for Maria, but no Semele.
Posted by Dr.B at 7:34 PM