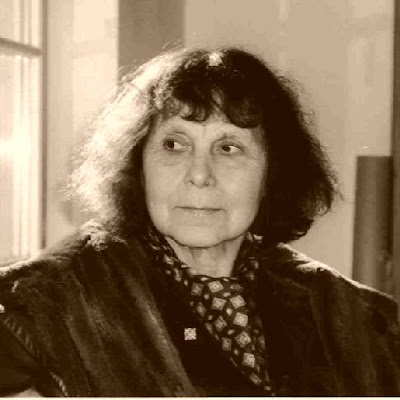 My son likes Sofia Gubaidulina (pronounced "goo-bye-DOO-lee-nah"), the composer in residence for the San Francisco Symphony, so I dropped in to the Saturday night performance at the symphony of her The Light of the End. The guest conductor for this performance was Kurt Masur, who used a score for this piece.

I came early to hear the interview with the composer before the performance, which consisted of Susan Key, the lecturing musicologist, Sofia Gubaidulina and her translator Laurel E. Fay. Susan asked questions, the composer answered in Russian and the translator tried to repeat what she said in English. There was a lot of talk about mysticism. I am assuming that the title of the piece refers to the often described white light that people see just before they die.

The only thing I completely understood was the description of an effect that would be heard during the playing of the piece: a flute and a horn would play in unison and to the listener it would sound out of tune. Both players would play their standard modern orchestral instruments, but the flute would play in modern equal temperament while the horn would play open notes without keying, such as would be heard if the notes were played by a natural or Wald horn. How out of tune this would sound would depend entirely on which notes were chosen. 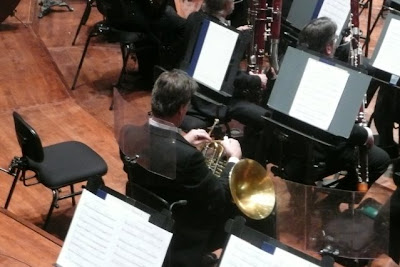 I definitely heard this when the piece came to this effect. I thought to myself, "This is just the sort of nonsense my son would like. He loves to talk about temperament all the time."

Please note in the picture above the piece of plastic attached to the horn player's chair. This is something new for me. The horns are positioned directly in front of the trumpets, and I assume the plastic plates are intended to direct the blast of sound they produce away from the ears of the horn players.

The picture below is a shot of the percussion used for the piece. I have left it in its original form so you can click on it and see what these instruments are in some detail. There were quite a lot of cymbal rolls, e.g. 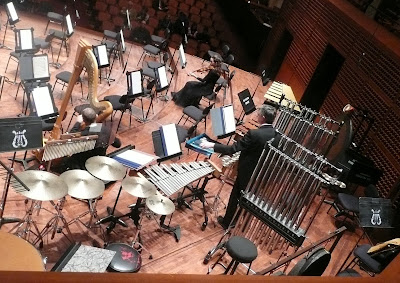 Orchestral composition in the modern world is often something more like a sound scape than a musical piece. It is a symphonic composition because it is played by a standard set of orchestral musicians. The program includes statements like, "The chromatic glissandi of the strings remove the fundamental conflict." [How could you possibly tell if a glissando was chromatic or diatonic? Forgive me. My mind has wandered.] The piece is a rather interesting and not unpleasant series of sounds that will not ever remind you of any musical style you have ever heard. Except perhaps while at the movies.

The second half of the program was the Bruckner Symphony Number 4. I sat in the tiers behind the orchestra and enjoyed my view of Maestro Masur standing facing me without a podium to block the view. He conducts without a stick with his hands held very low against his body. He has a slight palsy. He's in his 80's after all. His conducting is economical and extremely effective. I wish I liked Bruckner more.

I sang in the Symphony Chorus during the reign of Bloomstedt and listened to hear any changes in the basic sound of the symphony. The retirement of Dave Krebel as first horn is a great loss. There is now a more overall crispness in the sound, making the tone really more suitable for Gubaidulina than Bruckner.
Posted by Dr.B at 10:14 AM

We use sound shields in San Jose, too. Sadly it's a bit late for me; I already have tinnitus from the many years of sitting in front of the brass. It's just the nature of the biz, I guess, but I'm glad we are now more careful about this sort of thing.

Hi. I'm glad to hear that I guessed correctly. A violist stole a chair from the horns so she could have one, too.