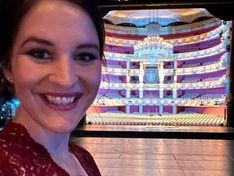 All the music on this concert is by Ludwig van Beethoven.

Nikolaus Bachler, reader.  There is no music.

Musicians from the orchestra of the Bayerische Staatsoper

One knows from hanging around in libraries that these songs exist.  They're in the complete works, after all.  But one never hears them performed.  Schubert seems to have kicked other people's songs out of the way.   The Scottish songs are in Scottish dialect, and Lise sings only in German.  She hits just the right religious note.  I wish I was seeing more of her.  I noticed that both singers rushed on to the next song with no pause between.  Just because songs appear together on the same opus doesn't mean it is all one piece.  It was possible to tell how many songs had been sung only by looking at the program.  A small separation would have worked better for me.  One wishes to characterize each song individually.

For the speaking there are no titles.  Nikolaus Bachlere has a lot of confidence in his diction.

This virtual concert comes with a sound machine in case you were missing the normal noises of a concert.  It includes booing.

Well, tell us what you thought of the singers and their talent, which one gentleman used to sing rare pieces that are by no means easy to perform.

I thought it was quite simply marvelous, and I was not on my own.

It’s a rare thing to find a Frenchman / Irishman capable of singing these masterpieces in the vernacular diction without breaking a sweat! His voice goes beyond my English for a worthy description. In my opinion, he is one of the best baritones on the circuit today.

I enjoyed it. Both singers sang well, but I felt that both were unnecessarily rushed through their sets. Edwin gamely took on the Scottish dialect, but I felt it was tough. I didn't know he was French, so I'd have to say he did well. I was there for Lise who is a favorite of mine.