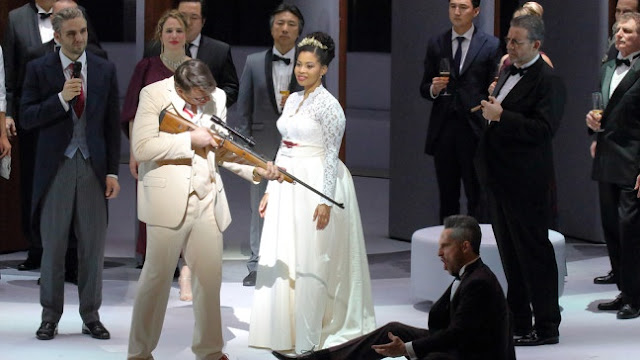 Conductor: Antonello Manacorda
Production: Dmitri Tcherniakov
Ottokar, Prince: Boris Prýgl (baritone)
Kuno, forrester: Bálint Szabó (bass)
Agathe, Kuno's daughter: Golda Schultz (soprano)
Ännchen: Anna Prohaska  (soprano)
Kaspar / Samiel: Kyle Ketelsen (bass)
Max: Pavel Černoch (tenor)
Ein Eremit: Tareq Nazmi (bass)
Kilian: Milan Siljanov  (baritone)
Der Freischütz, 1821, by Carl Maria von Weber streamed from the Bayerische Staatsoper.  It's a Singspiel, which means there is spoken dialog just as in Fidelio.  I remember it was covered in school as an historically significant event, though performances are rare.  Once long ago I was in Vienna when it was playing, and I thought not to miss it.  It is my only previous experience of this opera.
You can tell from the picture that it's regie.  These are business men in an office tower.  In the front is a man in a blue suit with brown shoes.  He has not been properly raised.  Blue suits go with black shoes.  I am not buying Freischütz in an office.  Waiters come in wearing pandemic masks.  The contest isn't about marksmanship, it's about being willing to shoot someone.  So the cops don't show up if you shoot someone through the window of an office building?  I'm not buying it.
I love the music in this opera.  I suppose it's the most like Beethoven.  The arias are nice.  Ok.  Alles gute.  So no one is really shooting anyone.  The waiters tell us that it's all fake.  The scenes end entirely without applause.
Max is told he must go to the Wolf's Glen, but in this single set production it looks just like the other scenes.  Max must shoot his fiance.  The music leads us to a happy ending, but then there is a twist.  I won't give it away.  The music is pretty good.  This is the same director that put Les Troyens in a mental hospital.  If you've never seen the opera, this will give you a rough idea.  It streams for 30 days.
Posted by Dr.B at 11:44 AM