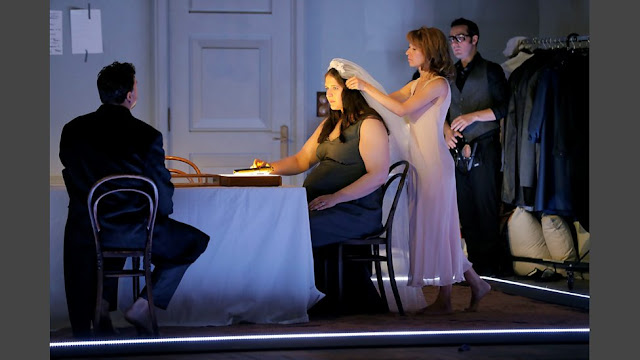 There is another Ariadne auf Naxos with Lise Davidsen from 2018 in Aix on Opera on Video.  In this one she is very very pregnant and miserable.  She frowns at the camera.  Towards the end she has the baby, and it is the "wunderschoenste Knabe" named Bacchus.  Cute.  Doesn't someone give birth on stage in Wicked?

Why should the Komponist be the only genderbending?  In the on stage audience are men dressed as women.   Unlike the opera convention, they only dress as women and are not intended to be women.

The tenor keeps bringing her a box with a gun inside.  The three ladies who have assisted in the birth, sing the Bach-like tune and Ariadne at last takes the baby in her arms.  I found this very frightening and upsetting, but nothing terrible happens.  We forget how unhappy Ariadne is.  She decides to hold the baby and love it.  This is pure regie, but the tilt to deep seriousness is fascinating.  This is only for those who truly love regie.