A Baroque Christmas in Sacramento 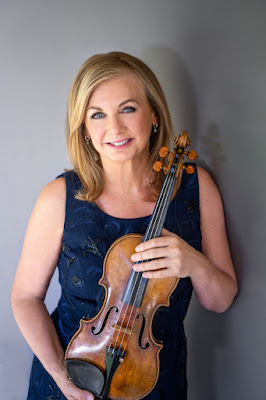 Last night at SAFE Credit Union Performing Arts Center in Sacramento we attended a lovely small orchestra concert with Margaret Batjer, conductor and violin.  I am calling these types of concerts twofers.  That means you get a soloist and a conductor for the price of one.  It's becoming very popular.  In fact the previous Sacramento Philharmonic and Opera concert was also a twofer.   Margaret's experience is as a concert mistress, and that's where she spent most of her time in the concert.  Only in the Bach violin concerto did she stand in front of the orchestra.  The rest of the time she sat in concert master's place on a raised platform where everyone could easily see her.


BACH Violin Concerto in A minor

Since it was in fact Haydn who invented the four movement symphony format, I reminded my friends that the other guys were not familiar with this form.  Corelli was even earlier than Bach.

A concerto grosso involves a small ensemble, this time a string quartet, that alternates with the full orchestra.

The Brandenburg Concertos are also concerti grossi.  The small ensemble in this particular case is a violin and two flutes.  The two flutists were not named, but I am going to assume they were Matthew Krejci and Elizabeth Coronati.

Our complaints about the previous concert seemed not to apply here.  We were quite happy with the acoustics.  Our guest violinist seemed to play significantly louder than the other string players.  We loved both the chosen repertoire and the manner in which it was played.