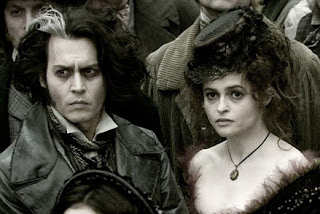 It was perfect to see this movie so soon after returning from London. Practically the opening line is "There's no place like London." This London is dark and menacing.

I went to see Sweeney Todd at my local cinema. I knew what I was getting into since I have seen the video of the Broadway version with Angela Lansbury. There's quite a difference between a video of a stage play and a movie. People getting their throats cut in the theater is going to exist mostly in your imagination, but a movie has to have all the gore you would have imagined right out where you can see it. I'm a little squeamish, but I just close my eyes when it gets too rough.

I liked the scene of the judge's office where the walls are painted with the famous paintings of Dionysian initiation from ancient Pompey. Further character development is hardly necessary. (This opinion may only reflect my art obsession.)

Mrs. Lovett, Carter's character, is only trying to be practical. We have a lot of meat going to waste, so why not make it into meat pies? Then hers will no longer be the worst meat pies in London. The movie shifts the balance of the drama back to the title character. On the stage Angela Lansbury dominated the action.

I think the singing will always stay in Angela Lansbury's voice when it plays in my head, but I didn't mind anyone here. Carter was occasionally difficult to understand. I suppose this is the place to mention it is by Stephen Sondheim whom I usually loathe. I don't here. Everything seems completely suitable. I mean, if you're going to write an opera--I think it's considered an opera--about a barber who slits people's throats and a woman who makes meat pies out of the dead bodies, well then I suppose it should sound exactly like this. It was exactly as spooky as it needed to be. I laughed fairly often. Is that bad?

Jane Wisener and Jamie Campbell Bower play the young couple who we will assume live happily ever after. Almost everybody else is dead.

Here are a lot of photos.
#ad