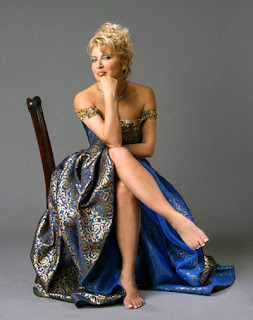 This is translated from Opernglas. I found the interview quite charming.

A constant career without PR-machinery. How that goes and why she had to leave Germany against her will, Maria Guleghina explained to our coworker Markus Wilks. Cutouts from the interview:

Ten years ago Opernglas presented Maria Guleghina for the first time - as a singer, who was in demand world-wide already at that time and had established herself domestically in Hamburg. She spoke of the fact that only life on the French Riviera was more beautiful than Hamburg. Are you still a Hamburgerin?

No, unfortunately no more, although I hold the city dear. The Alster is as beautiful - as the whole city. But I had to leave Germany, because as a freelance singer I could no longer have a fixed contract. Even with legal assistance I could not prevent having to leave Germany practically within 24 hours. In the meantime I live happily in Luxembourg in the country and rent my Hamburg house.

Your Turandot here in Valencia in the Palau de les Arts Reina Sofia was your role debut yesterday, to which I would like to congratulate you very cordially. Is one so experienced still nervous with all stage landing on water washed singer? ["mit allen Bühnenwassern gewaschene Sängerin" Hard to translate. There must have been water in the production.]

Yes, and how, because it was not only my role debut. I was allowed to appear before the eyes of the Spanish queen in an unusually beautiful production. Thus a special and particularly beautiful pressure rested on us singers.

There are always so many things to improve and my tenth Turandot will be surely better than my first, but I am content and happy nevertheless and sing the Turandot very, very gladly.

If you know that an unpleasant director awaits you, do you then reject the commitment?

For me professionalism means to say at the right time ones opinion and not hold everything in, but also to stand by ones word. If I have once said “Yes!“ I stand by it, even if the contract is not yet signed.

The fact that you say your opinion and try to stay grounded, sometimes one encounters contradiction and irritations in the opera scene. Are you a difficult person?

One said to me once in an interview that lady Macbeth would fit me so fabulously and asked, whether I would feel that the lady corresponds to my character. I answered. "Naturally. Each morning at breakfast and each evening at dinner I murder five people." Honestly: I am for my cats, dogs, chickens and lambs a loving, caring mummy, who watches out and does not permit that they are eaten by other animals.

So Maria Guleghina is in reality a good, nice woman.

Not good, but also not bad. I know what I want and say my opinion. I try in my occupation simply to be professional. And if colleagues or producers come unprepared to the rehearsal, that does not meet my expectations. One cannot always be only nice, if the professionalism is missing as basis. Because if I close my eyes to everything, it falls back onto me, which I would not like. I have a lot of patience and smile for a very long time and try to implement my understanding of opera with a smile, gladly subordinate myself to good directors in addition. Unfortunately some singers understand only if they get clear instructions - after the slogan “Like this and not differently.” Then it can quite come to involvement. However sometimes one must think also as singers about the ideas of the director, before one rejects them too quickly. An example for this is Phyllida Lloyd’s Macbeth, whom I sang among other things in 1999 in Paris. I should wash not only my hands after the murder scene, but get completely into a bath tub. My wish, whether we couldn’t find another picture, the director wanted to think over. In the night after this rehearsal I dreamed, and saw myself clothed, sitting in the bath tub and washing my hands. Like a dream picture of Macbeth. By the next rehearsal I only wanted to know, what we were going to do with the bath tub. Phyllida was already ready to get rid of this part, but now we arranged this strong picture together. I like it so much to work in this kind of team because I am an actress.

What will we be allowed to expect in the future in new roles?

First I play Adriana Lecouvreur at the Met in the old scenery, but with a new director. Then comes Verdi’s Il Corsaro in Bilbao, and with Maestro Gergiev I will try out in the Mariinsky theatre the St. Petersburg version of Verdi’s La forza del Destino, which is more difficult to sing.

But still no Wagner?

No, Wagner is not for me. Wagner is philosophy and not only singing. Far more important than how you sing, it seems to me, is that you know everything for example about the Grail and self devotion. It is so serious. One cannot simply play Isolde in such a way, one cannot see her as a love character, but must embody the philosophy, which stands behind the role. One must sing a whole library.

How does one hold oneself so for a long time in the business, without being supported by a CD company?

I do not know. Can you tell me? And then also still to have so many “enemies“ who know to report on ones bad character. Above all former agents. Certainly: I am already very glad that I managed to have held on for so long without the support of a CD company. There I have to thank in particular my public for their loyalty.

In this summer you appear again in the arena of Verona, where you regularly guest since 1996 and 1997 for that surprisingly successful debut in Nabucco. Also in this year the Abigaille stands in your appointment calendar in Verona.

Yes, and I am very pleased about this, because Denis Krief is one of my favorite directors. Overall the arena di Verona for me is a very special place, I sang my debut there under Maurizio Arena and also under Nello Santi. In the arena I feel like a Gladiatorin and it gives me amazing strength. It is simply impressive. When people put on their lights and when they applaud, that is completely different than in the opera house. A pleasure!

[This refers to the tradition of lighting candles in the audience at the arena. Grossartig. I have translated the text that is available on line. The version in the magazine, which I bought in Zurich, is longer. I remember her saying she fell off the chairs in one of the Met performances of Macbeth.]
Posted by Dr.B at 10:15 AM