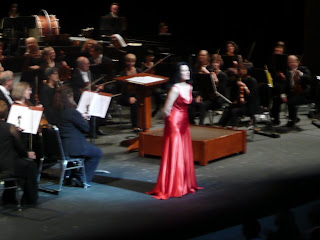 Cal Performances brought the Angela Gheorghiu show to Zellerbach Auditorium in Berkeley on Saturday night. With her were the San Francisco Opera Orchestra with Marco Armiliato conducting. Marco is from Genoa and specializes in Italian repertoire.

Four numbers--overtures to Nozze di Figaro and La Cenerentola, intermezzos from Manon Lescaut and Cavalliera Rusticana--were for the orchestra alone. I liked very much his version of the Cavalliera Rusticana but felt throughout the concert that the orchestra and the conductor were unfamiliar with one another and uncoordinated. The Rossini was actually pretty bad. He is obviously looking for greater subtlety in tempo than they are accustomed to.

They played far too loud for Angela. Normally they are down in the pit of the opera house where the volume is somewhat muffled. I couldn't help wondering if anyone bothered to sit in the house and listen to the balance. It's painful for me to write about this, and if you enjoyed the concert I apologize. She stood close to the conductor, on his left, our left, and faced him much of the time. I was seated on the side where her face was turned away.

I love Angela. She even does the queen's wave with great expertise. She wore three outfits--white, black and red to close--and looked fabulous throughout.

I love "Non ti scordar di me" but she was covered by the orchestra the worst in this number. Most pieces ended with loud high notes and arm waves.